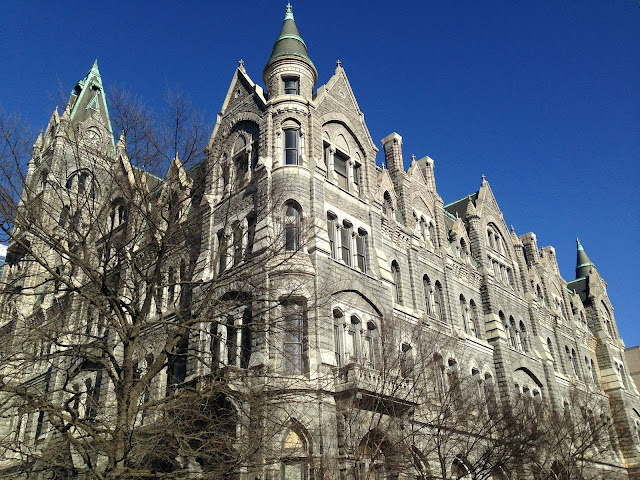 I usually visit graveyards and cemeteries and then research to find out about the folks who reside there. Aside from battlefields, I rarely knowingly visit a place where someone has actually died. 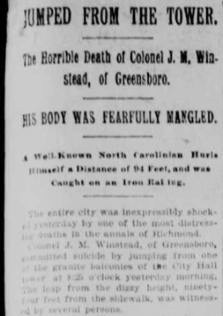 On Sunday, along with other members of the RVA Horror Book Club, I visited the place where a man lost his life… a place so lovely that when walking by we tend to look up to the building's grand appearance and easily overlook a bent spear in a decorative fence.

If you look up, you can see the window where a man named Colonel J. M. Winstead of Winston, North Carolina who was a highly esteemed banker and businessman fell to his death landing on the fence. 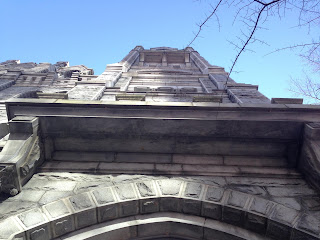 On August 23, 1894, Winstead climbed the steps of the Old City Hall clock tower. From there, he fell from the window being impaled on the spiked cast iron fence below the building.

There appears to be a great deal of speculations about whether Winstead jumped, fell, or was pushed out the window.  Some jump to conclusions (oy, that's a bad unintentional pun which I'll leave) that the distance of a jump, a fall, or even a push would land Winstead at various distances from the building.


Willie Dunsford, who was standing on the corner of Tenth and Broad streets, happened to look up at the clock tower and provided the most exact description of Winstead’s end to a Richmond Dispatch reporter.  Dunsford said he saw Winstead discard shoes, hat and cane, “then stand up on the railing of the balcony, bend over a little, and jump off headlong toward the ground.” No matter what caused it, witnesses to the aftermath who happened to be on Broad Street that day all agreed they would never forget “the disheartening sight” of Col. Winstead’s gory end on the cast iron fencing of City Hall. 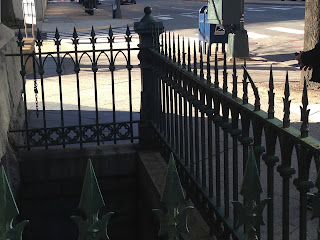 Would Winstead take a dive from the building?

Have you ever heard that really it isn’t the feeling of falling that people fear when they’re in a high place such as a clock tower or bridge, but it is the fear of jumping? “No, no, no, I’m not going to kill myself,” you mutter. In fact, research shows that “high place phenomenon” or HPP actually stems from “a misinterpreted safety signal” and is not associated with suicidal tendencies.

Winsted’s body was returned to North Carolina where there was funeral at Greensboro’s Green Hill cemetery the evening after the day of his fall.

His friends at the funeral loyally maintained that Winstead’s hat blew off, and it was his attempt to catch his hat, not suicide, that caused his death. 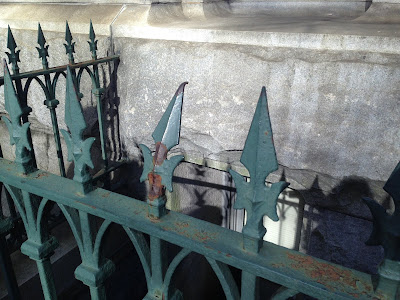 One of the saddest parts of this story is not Winstead’s death, which is pretty sad itself, and it is not that at the time customers of his bank in North Carolina immediately went to withdraw their money assuming that Winstead’s “suicide” indicated some type of scandal or financial problems.  That turns out to be unfounded. The saddest part of this story is that Winstead’s gravestone is so rubbed away that it can hardly be read. Without the bent fence as gruesome as it may seem, I would not even be thinking about Winstead nor would most others.


The next time that you see a slight bend in an fence, you may just wonder what happened to cause it.  And, you may even remember the story of Colonel J. M. Winstead.

Posted by Goth Gardener at 8:15 PM