“… her artificial world was redolent of orchids
and pleasant, cheerful snobbery and orchestras
which set the rhythm of the year,
summing up the sadness and suggestiveness of life
in new tunes."
~F. Scott Fitzgerald


Saturday was the Virginia Orchid Society’s Annual Show and Sale.  It’s been a few years since I attended this event; since my Phalaenopsis orchid is doing quite well (thanks to a little advice from Ms Misantropia to put the orchid closer to the window)

I’ve been itching to purchase another orchid. I’ve never been a gardener who knows what she’s doing before the fact. I’m always trial by error although thankfully I have a green thumb and I don’t recall killing anything out of negligence.

The flyer for the orchid event noted that there were thousands of orchids on display and for sale including nine orchid vendors. The event also takes place at one of my favorite local shops, Strange’s Garden Center.

After seeing a movie and a light Indian lunch, we headed to the event. I went from table to table while my fella followed along. He has been to an orchid show before and he likes plants and flowers. In fact, I got him interested in gardening; before we were married, he had made the garden at his house quite gorgeous.

Here are some of the more gothy selections: 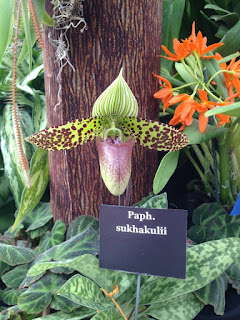 Based on the amount of light that I have at home and the varieties that were being sold, I went home with a Paphiopedilum Sukhakulii from Marriott Orchids out of North Carolina. I was incredibly drawn to one of the award-winning plants and when I saw this one among the “for sale” orchids I had to have it. I actually squealed. The little hairs; the alien-like plant formation. I don’t know… there was just something about the Sukhakulii that drew me in.

Apparently, the Sukhakulii is easy to grow and happens to grow best in warm and humid weather which means it is going to do just fine as we go into Spring/Summer here in Virginia. It prefers a moderate amount of sunlight so it will actually need to be moved from this place on the windowsill (which faces south) to the other window which faces east. It’s funny; this window that faces east was actually an upgrade for my townhome. Yet, at a mere $300 for a window, I have no idea why all of my neighbors didn’t opt for this. This gothygirl needs light especially during the dark days of winter. 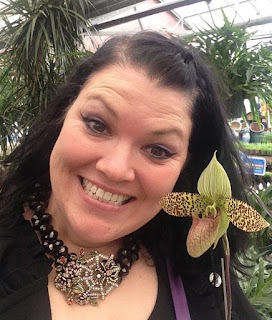 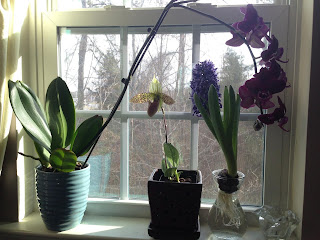 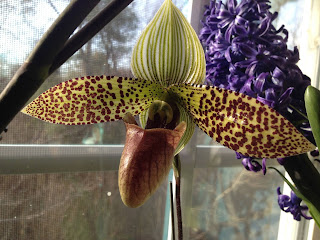 Posted by Goth Gardener at 4:46 AM

Email ThisBlogThis!Share to TwitterShare to FacebookShare to Pinterest
Labels: Only in Greater RVA y'all