“December, in my memory,
is white as Lapland,
though there were no reindeers.
But there were cats.”
~ Dylan Thomas, A Child's Christmas in Wales 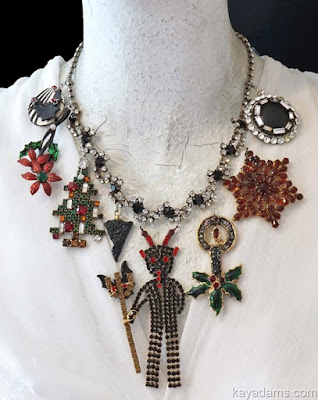 We had hoped that December would be better than November. It started off with a cemetery tour at Hollywood Cemetery with the River City Cemetarians and then led into the annual Krampus walk. It was a day full of friends, raucous fun, and happiness. I had been planning my outfit for quite some time; and, I had planned my latest extravagant Krampus necklace since January when I purchased a Krampus brooch from the Czech Republic. Along with a Weiss Christmas tree pin and a gorgeous garnet brooch, I was all set my favorite jewelry necromancer, Kay Adams to work some magic. She did. 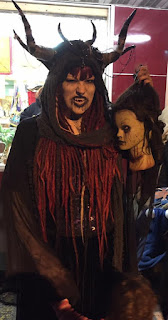 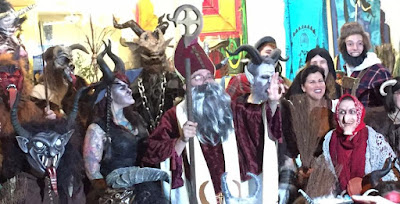 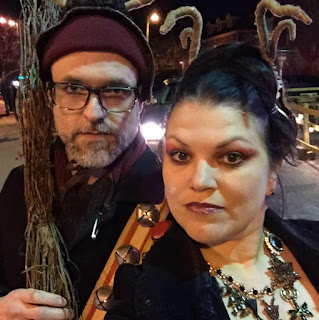 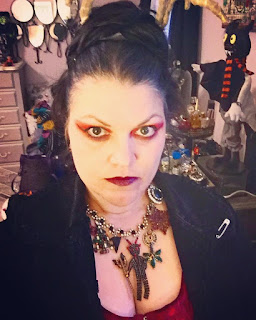 That day the temperature was a bit too warm for my original outfit. I’m glad that I have a closet versatile enough that I could create a back-up outfit for the Krampus walk.

We had a great deal of fun and then headed to dinner. Hours later when we arrived home, we were ready to snuggle in when our little four-paw family member meowed that something was wrong. Within hours, everything went terribly wrong and our household has gone quiet as we’ve lost a loved one. All I want to write about is how much I have hated 2016 and how all the magic is gone, and no one wants to read that. I started to write holiday cards because I really, really like my cards this year (I usually do but this year they make me laugh). I wrote the first card and it came across as so dreary that I had to stop and set them aside. We’re just going to mourn for a while… and then a while after that. 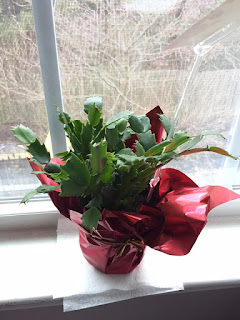 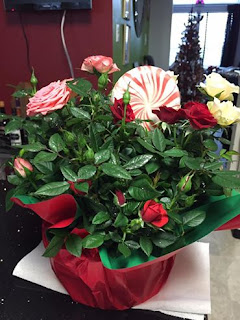 We both have given each other flowers. I gave my fella a Christmas cactus not yet in bloom; he gave me roses with a candy cane stick.

We did not feel like it but we put up our Christmas trees and decorated the house (including our Krampus ornaments below). 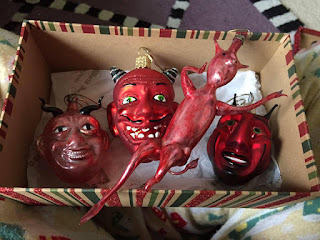 One day we will feel normal again. "Until then we'll have to muddle through somehow."

Apologies on the moppiness.  I promise that my next post (about a candy historian's lecture) will be much more lively.
Posted by Goth Gardener at 4:59 PM 12 comments: Links to this post


It’s been about a month since the Virginia Quilt Museum (VQM) Seminar, Mourning and Meaning Through Cloth: A Textile Study, a special two-day conference on death and mourning in America, which focused on American rituals of death and grieving as shared through the lens of quilts, mourning dress, and historic textiles. Regardless of the time, that seminar still sticks with me.


While the first day (which I wrote about here) focused on the symbolism of death depicted in mourning jewelry and gravestones, and how these symbols were also found in historic quilts, the second day of the seminar focused exclusively on textiles with lectures focusing on mourning dress, samplers, and macabre quilts. The three lecturers also work in positions as public historians.

The second day of the seminar included a lecture by Karin J. Bohleke, Director of the Fashion Archives & Museum of Shippensburg University, PA, an avid seamstress, embroiderer, and lace-maker. Her lecture was titled, "The Mourning After: Fashioning Grief in the 19th Century.” Bohleke, whose presentation included images of Victorian women in mourning attire, began with an overview of the general terminology associated with mourning along with the intricate stages of dress.

She discussed how in “general mourning,” that which includes all citizens and not just royalty, the middle class was often quite concerned about making social missteps considering there were so many differing views from various sources; and, they were also concerned about the financial burdens of participating in the culture.

For the most part, one’s economic status determined one’s ability to participate in the culture. Depending on the availability of funds, one would dye clothing, add a black collar, or add a black brooch. Participating in mourning became a serious financial burden especially for women who not only had lost a loved one but who perhaps also lost a source of economic support. In such situations, the woman was required to change her clothing, or alter it, to meet the society expectations of mourning dress; and, she also was required to provide a meal. Bohleke shared stories of women who used their last coins, which should have been kept to purchase food, on mourning dresses.

Black material was expensive and it was also unstable, which Bohleke emphasized meant that it was “not washable.” The dye would rub off on one’s skin which posed an additional concern since it was difficult to wash off and, at times, the chemicals caused a health risk. Talk about a goth girl’s nightmare!

With Americans following European fashion, “fashionable mourning” attire could economically ruin a family since the veil lengths, fabrics, and types of black varied from season to season.

American women began viewing the European mourning fashion as an unnecessary expense and pushed back against the culture by transforming their clothing into mourning attire and even repurposing their mourning attire, which led to secondhand clothing stores featuring mourning attire becoming a feasible business opportunity.

Bohleke concludes that in spite of the negative aspects, Victorian mourning traditions represent a profound understanding of the nature of grief. In her paper, she emphasizes, “…mourners realized that grief requires time, and they generously allotted that time. The specialized and standardized clothing generated instant comprehension that required little or no explanation in order to elicit sympathy” (190).

The second lecture, “Memorial Pictures & Samplers” was from Sheryl DeJong a representative from the Smithsonian Institute National Museum of American History Textile Collection. The first sampler was donated in 1886 and is known as the Margaret Dinsmoor sampler. The earliest dated sampler in the collection was made in 1735 by Lydia Dickman of Boston, Massachusetts.

DeJong explained that samplers have become important in museum collections as representations of early American female education. Many of the 137 American samplers in the Smithsonian collection are signed, and some are inscribed with locations and the names of teachers and schools. DeJong noted that young girls would learn needle-work before they would learn how to read or write. If the girl finished her sampler, she might move to a higher level of school such as silk painting.

In many of the examples, DeJong pointed out that some type of reference to George Washington was included not as a sense of mourning but because it was popular and fashionable; it was not intended to be sad. And, just as the VQM prepared a pamphlet “Design on Stone: Symbols of Mourning and Remembrance” for the two-day seminar with “the objective to connect symbols used on tombstones of various eras to quilt patterns and quilting”, noting that “the symbols are often found on both [gravestones and quilts] and reflect the design of the period” (VQM), DeJong emphasized that many of the symbols, such as weeping willow trees and urns, are included in the samplers.

Finally, the seminar keynote speaker was Polly Mello, a quiltmaker-historian, collector, independent scholar and curator. She shared her antique and contemporary quilts from her collection, “Midnight in the Garden of the Quilt.” This collection includes mourning quilts, coffin drapes, quilts devoted to presidential assassinations and other headlines, and crib quilts from the 1840s to 2016.

There were so many amazing quilts. For now, I should probably just limit myself to focusing on one so I will write about one of the highlighted quilts, “Kentucky Requiem: A Quilter’s Gathering”, a reproduction of the infamous Kennedy Graveyard Quilt often known simply as “the graveyard quilt,” which Mello argues, “…is the most famous mourning quilt in the country and one of the most recognized quilts in American Quilt History” (Exhibition 1).

The graveyard quilt dates to 1843. It is housed in the Kentucky Historical Society's (KHS) Thomas D. Clark Kentucky History Center in the Nina Mitchell Collection. It is an album quilt meaning that it includes signatures of those who made the quilt so historians know that it was created by Elizabeth Roseberry Mitchell with help from her two daughters. The quilt was passed down through the family to Nina Mitchell Biggs who donated it to the KHS in 1959.

Made of cotton fabrics in shades of brown, the quilt includes stars alternating with blocks of fabric. In the center there is a scene of graves, presumably a family plot, surrounded by a picket fence with climbing roses. There are coffins inside the fence and as well as along the border of the quilt where there is another picket fence. Names of several family members are attached to some of the coffins on small strips of paper both inside the center picket fence and around the border of the quilt (KHS).

Mello, in “Conversations on Midnight in the Garden of the Quilt Exhibition” writes, “Elizabeth Mitchell is said to have had to leave behind the graves of two sons when she moved to Kentucky. She made the quilt from the school clothes of the sons”(1). Mello explains that this was intended to be an “interactive quilt” since the coffins were labeled with the names of family members. She presumes that when someone died, their coffin would be moved into the family plot in the center of the quilt. She argues, “Caring for family graves was very important in the 19th century. With this quilt, Elizabeth was able to care symbolically for the family graves”(1).

KHS affirms, “This quilt is an excellent example of nineteenth century mourning customs as well as an illustration of the emotions and experiences that were often expressed by women through their quilts.” In an interview, Julie Kemper, curator of the Kentucky Historical Society's Museum Collections and Exhibitions explains that mourning customs in the 1840s were different than today but during the time of the making of the quilt, the symbols used most frequently for mourning quilts included angels, weeping willow trees, and wreaths.  A graveyard design in a mourning quilt is rare and the quilt maker’s design was fairly unusual (Toncray).

Because the graveyard quilt is only occasionally put on display and it is so renowned, Mello knew that she could never be able to purchase the quilt to add to her own collection; instead, she paid tribute to the quilt by making a reproduction. It is a traditional reproduction in how it is made; she explains that her 2014 Kentucky Requiem: A Quilter’s Gathering “is made entirely by hand, as it would have been made in the 1840s” noting that it is hand appliqued, hand pieced, hand embroidered, hand quilted and hand constructed. With Mello’s reproduction quilt she even emphasizes that instead of family members, she includes the names of her quilt friends noting, “We will all be ‘buried’ together on the ‘Kentucky Requieum’ quilt” (1). Okay, this makes me tear up each and every time I think about this. It is such a beautiful gesture and acknowledgement of such profound friendships.

Bohleke, DeJong, and Mello have all reconstructed a glimpse into the past through the interpretations of clothing, samplers, and quilts. The individual stories of each piece that they shared speak to the larger community of the time. The artifacts serve as a bridge to connect us with the past and with our American history.

The seminar has passed but VQM will have Polly Mello's exhibit on display until December 17th. All of the pictures from this post were taken at VQM by me during the seminar. For more details about the exhibit, you can visit the museum website.