...tree magic, murder, and rising from the dirt... 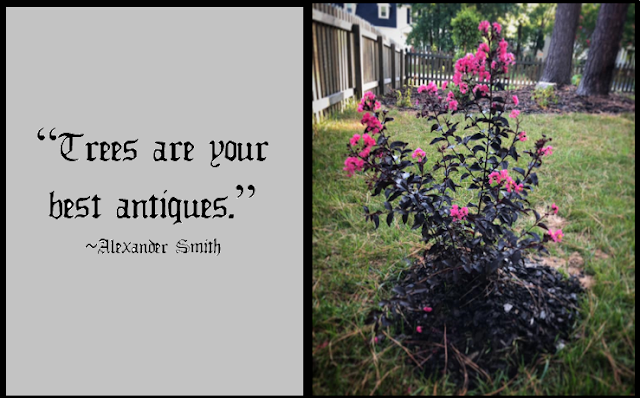 As long as I can remember, I have loved trees. One of my favorite ornamental trees is the Lagerstroemia, commonly known as the crape myrtle or crepe myrtle. These are popular trees in the American South.

As the story goes, as they made their way from China and arrived in England in 1759, they were met with lackluster enthusiasm for the crape myrtles would not bloom. It seems that England just isn’t hot enough to get crape myrtles to bloom; but, the American South is.

The botanist to King Louis XVI André Michaux introduced the crape myrtle into Charleston around 1786, and the tree exploded in blooms. Crape myrtles love heat and they love humidity. They grow quickly and they’re even tolerant to drought. While some of our other Southern bloomers like the gardenia and azalea require acidic soil, crape myrtles don’t seem to care what they’re given. Clearly they were a hit in Charleston and Southerners gossip so they ended up all across the South after that.

Crape myrtles need to be cut back annually to allow for new growth and blooms for the next year. How much these need to be cut back is up for debate and Southerners are quit opinionated. One of our neighbors cuts his down to little stumps. That happens to trees on public lots as well. Many people call this “crape murder” and I happen to agree with them. No one needs to cut back a tree to that extreme so that other trees make fun of them in the winter. Seriously!

This, of course, leads to my own crape myrtle experience. In August 2011, I planted a Red Dynamite crape myrtle on our property at the old house, the townhome with the HOA (Home Owners Association), which promptly sent me a nasti-gram reading that I could not have a tree. There were no rules or regulations in our HOA paperwork about not having trees on our property but I obeyed and dug up the tree. Well, I sort of obeyed. I knew that a Red Dynamite Crape Myrtle, which grows to about 20' x 20', would grow too large for our wee backyard so instead I moved it to the common area. That was my illegal move but the community president did always talk about having trees. He just wanted to be the one who picked them.

I’m a girl who follows rules so let me explain that this was a bit out of character for me but I loved the Red Dynamite so much. And, because I lived on the end unit, I had become responsible for watering the community trees if they were going to be watered at all. I figured if I was the one taking care of the others, what would it matter if one more pretty tree was added to the mix. That isn't the best logic but that's what I did. Unfortunately, it turned out that that community area's trees outgrew the tiny crape myrtle and for much of his time he did not receive enough sun.

The landscapers also repeatedly cut down the crape myrtle thinking he was a weed. That little tree was spunky and he just kept growing back. The weedwacking continued to happen all the way up until last year when we bought our current home. Just days before I planned to move him, the landscapers cut him down to inches. I was so angry then but now I'm delighted because he made it.

From the pictures, you can see that he was just a few inches high. My fella did not believe he would make it but trees are magic and I believed. He grew and he grew and within one year he is nearly 6 feet tall! Mind you, he’s an 8-year-old tree who had some pretty good roots since I always watered him.
I think we can learn so much from crape myrtles—how to keep going in adversity; how to look stunning even on 100-degree days with high humidity; how to be a little exotic but thrive where you're planted; how to be low maintenance; and, how to keep growing even when cut back. In fact, crape myrtles grow because they’re cut back. I guess I wouldn’t mind being a crape myrtle.

Crape myrtles are like people in that they come in a variety of shapes, sizes, and colors. While the Red Dynamite may be considered more of a traditional crape myrtle, there are numerous dark and spooky crape myrtles including the Ebony & Ivory crape myrtle, which only grows to about 10'x 8' and includes bright white blooms against black foliage. I have the Ebony & Ivory tree planted near the Red Dynamite in the perennial hibiscus garden. One day they will grow to the point of having their blooms touch one another (and further block the view of the neighbor's house).

Recently I added a Magic Midnight crape myrtle, which will grow 4-6 ft tall in our front yard. This is a smaller crape myrtle that has purple-maroonish foliage and bright hot pink blooms. That tree is pictured at the very top beside the quote for this post.

Crape myrtles are great tree friends and I look forward to having them for many years to come.

Posted by Goth Gardener at 5:42 PM 2 comments: Links to this post 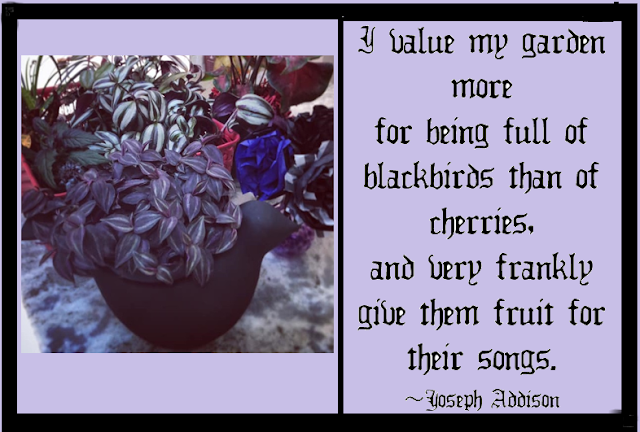 The following is an adapted version of the talk on Gothic Gardening that I shared at the Poe Museum’s July Unhappy Hour. I was asked to make the content available. The way the event is structured, I actually spoke twice; and, I must admit that the second group received a much different version than the first. You see, as I was standing under a large tree in the Poe Museum’s Enchanted Garden prepared to give my talk, a bird, I think it was a cardinal and it was certainly not a raven pooped on me right as I was handed the microphone. At the time, I held my arm that was covered in bird poop very still. The six-minute lecture was not going to go as planned; I knew for I could tell that the matter was also smeared down my new black, lace dress. I had no idea that it was also in my hair. Thanks, little birdy! Alas, the presentation continued but perhaps a little quicker than I would have liked. After my talk, several shared that being pooped on is actually good luck. 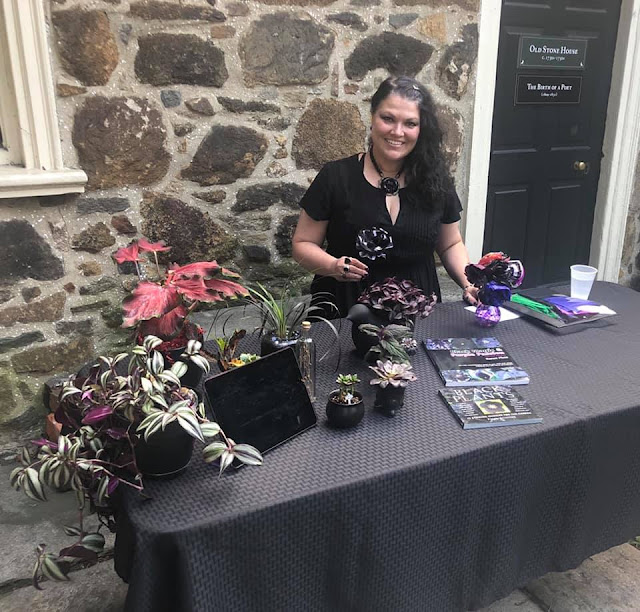 In the subheader, you’ll see that I use gardening as a metaphor for living. I share stories about how plants & flowers, creepy things, and the dead including cemeteries have brought me back to life. My blog posts actually rhyme with this month’s Unhappy Hour (at the Poe Museum) focus on how Poe's natural surroundings inspired his work.

Growing up, Poe would have been familiar with the Romantic era landscape designs that sought to express the inherent beauty of nature in opposition to the strictly symmetrical, formal gardens favored by those of the past. These gardens were beautiful landscapes that included antique statues, urns or pedestals to lend interest. These gardens would have included blooms that by some would have been considered imperfect. Even the dead vines of ivy covering the side of a building would not necessarily have been removed. The look of ruins was a highly sought-after aesthetic that would add a bit of enchantment to a place. We’re not exactly talking about the Addam’s Family snipping off the blooms of roses but that the roses would naturally bloom and die, and be left on the plant until they fell off.

As we move into the Victorian period, black flowers were highly sought after by many gardeners as black blooms and black foliage can include a dramatic addition to any garden. In Victorian black gardens, these dark plants- black, deep reds, and purples-- were the focal point in landscape design. Placement was key for dark plants and foliage since darker flowers and plants can end up blending into the landscape if planted in shady, darker locations, especially if you use black mulch like I do.  Lighter backgrounds, less busy designs, and even stone urns and vases are key to make these black plants pop.

Much of Poe’s work was considered gothic and I was invited to the Poe Museum to talk about Gothic Gardens. I do not believe there is any one way to have a Gothic Garden. If there were, I would encourage you to break the rules immediately.  Gothic Gardens can evoke images of old abandoned cemeteries with gravestones and roses and they can also evoke images of a more manicured garden with rare and unique blooms. They are certainly not a ‘one size fits all’. I believe that today’s gardens take a bit from Romantic era landscaping and Victorian black gardens. Each garden is very much about the gardener’s tastes and preferences.


Arguably, there are a few features of a gothic garden. First, a gothic garden design follows the gothic architectural style—think slender vertical pillars, pointed arches, stonework, wrought-iron fixtures, and trellises. There may be ivy climbing up a trellis with a statue of an angel nearby. For example, in my garden, I have a gothic trellis with morning glories including Grandpa Ott, which is a dark blue-purple bloom with a red star throat. My mother-in-law says the center looks like a glowing candle.

Second, when we think Gothic, we also think mystery and spooky, descriptions that resonate with Poe and his writing. A gothic garden should have some sort of element of surprise. A statue would not be isolated or featured, but in the Gothic setting a statue would nearly be covered and hidden by climbers such as that ivy that I mentioned or even climbing roses. Also, it would be better if that statue were missing an arm or a head to show age. In my garden, I have a spider-shaped topiary perched on a trellis.
Finally, a Gothic Garden should include those rich colors of the medieval period. Deep wine reds, dark purples and blues, and even black against dark green foliage or decayed vines. I brought a display of some easy-to-grow houseplants to the Unhappy Hour.

While dark plants can be easy to grow, some thrive in full sun while others need shade; you’ll want to consider your plant hardiness zone. Depending on what part of the Greater Richmond area you live in, we’re considered zone 7a/ 7b.
When designing your own Gothic garden, keep in mind what creates a great gothic garden. It’s all in the spooky, mysterious details. And, it’s very much what speaks to you. Some goth gardeners focus on ancient herbs and plants that come with legends and lore. Others focus on apothecary gardens. And even others focus on plants that are deadly.

In my own garden, I focus a great deal on names. I like the dark colors but it’s all in the names:
·        Superstition Iris- this is a rich dark beauty with luscious deep purple-black flowers that is among the darkest. It almost resembles leather right before the bud opens.
·        Dianthus Heart Attacks – these are a brilliant red-black, carnation-like flower that attracts hummingbirds
·        Bela Lugosi Daylily- deep, deep purple flowers that are almost black with a green throat
·        Nosferatu Daylily- Similar to the ‘Bela Lugosi’, this variety has a shorter height, and more prominent veining in the pie crust ruffled petals. It has a chartreuse throat.
·        Tiny Ghost Lily
·        Pagan Dance Iris
·        Bleeding Hearts

I invited participants to come over to see some of the houseplants that I’ve brought, to review the slides featuring some of my own garden blooms, and even if they didn’t feel that they had the greenest of thumbs, they could go home with their very own gothic paper flower. No water or fertilizer needed.  I shared a basic fan-fold paper flower design.
Posted by Goth Gardener at 5:27 PM 2 comments: Links to this post