...anguish of spirit, madness, and a founding father's childhood love...

“…whatever anguish of spirit it may cost,
I am willing to know the whole truth;
to know the worst and provide for it.”
~ Patrick Henry

A few weeks ago, I mentioned that I have returned to graduate school to focus on Public History. For one of my courses, I’m required to conduct site visits. While I do have criteria to follow, the idea that homework includes visiting historic sites is still pretty awesome. We were given a list of regional tourism sites in the area. Since I grew up here, I’ve been to many of the locations so I looked for places that I’ve never visited. I’ll be honest with you. Since I am starting out in a new program at a seemingly conservative school, I’ve been trying to keep my spooky interests in check (unsuccessfully, I might add because I am who I am).

Last week’s selection has reminded me that one could argue that all Southern historical sites have a bit of darkness to them. 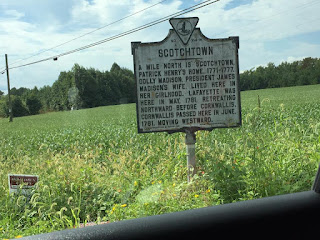 I selected Patrick Henry’s home of Scotchtown. Just in case you have no idea who Patrick Henry is, he was an American orator, lawyer, and leader in Virginia politics. He became famous for the forceful, persuasive speeches which he used to help bring about the American Revolution (1775–83).  You probably known him as the “Give me liberty or give me death” guy. Henry and his family, along with numerous friends and extended family members lived in Scotchtown from 1771-1778. Scotchtown was his home when he came up with the ideas in his famous speech and it was from this location that he rode to St. John’s Church in Richmond on March 23, 1775 to deliver it.

Scotchtown isn’t far from my current home. It’s less than a fifteen minute drive on some back country roads. For years my fella and I have seen the Revolutionary War signage promoting his home and mentioned going but we never have. I figured this was a nice benign way to start my site visits… a way to not typecast myself as the Poe Museum girl or the historic cemetery girl (although I’m not really that concerned about any of this). My plan was to go to the historic site, which I assumed wouldn’t be too incredibly interesting, and then drive to St. John’s Church to think about what it would have been like in 1775 to travel that distance. Mind you, I would be traveling in a car.

There were a few interesting tourist options at Scotchtown including a cell phone tour where you dial a number and then listen to the prompts to select a spiel from the various locations on the grounds. I did that and I also toured the house with a guide named Sylvia. Sylvia noted what portions of the building were reproductions and which were original including the hardwood pine floors. She shared that in the 1930s, the building had been abandoned; it had been vandalized and lived in by a “squatter” who also brought in wildlife. When the building was restored down to the original paint colors, they were surprised to find the original doors intact.The hardware was missing but the wood and all the beautiful craftsmanship was there.

Throughout the tour, Sylvia pointed to the significant furniture that had once belonged to Henry. One desk she noted was Henry’s father’s design that he had made in order to better read maps. The underside of the table has a bird cage design which enables it to swivel in all directions making map reading more efficient, since one would only have to move the table instead of the map itself.

She pointed out one of the corner chairs being in the room because Henry actually died while sitting in one, albeit not this chair. She was quick to note that the original is housed in Williamsburg, VA in the Governor’s Mansion. Sylvia explained that Henry’s doctor determined that he was extremely ill. The doctor left him a concoction that was either supposed to heal him or kill him. Because Henry was in such pain, he drank the concoction, which per our guide included liquid mercury. Henry died while sitting in a corner chair. When I searched for this information, even using the keyword search “Patrick Henry dies in chair” (I know...I'm that kind of researcher!) I could not confirm this information. Most websites list Henry dying from stomach cancer. Any scholars out there wish to chime in, please do.

Overall, I thought it was a bit odd to share this with visitors (and by that, I mean, I enjoyed the weird little details); and, it certainly does not resemble some of the boring Revolutionary War tours that I experienced as a young child (Remember, I’m from the area and every school field trip seemed to connect to either the Revolutionary War or the American Civil War. I recall being hot and bored.) 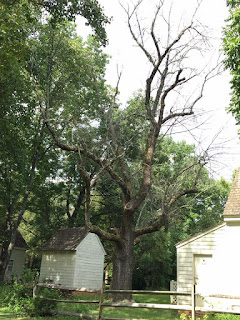 During a good part of the tour, Sylvia discussed Patrick Henry’s relationship with his wife. They had known one another since childhood. Even by the standards of the time, when they married in 1754, he was 18 and Sarah Shelton Henry was 16. They would move numerous times. By the time she had had six children and were living in the Scotchtown home in 1771, Mrs. Henry suffered from some kind of serious depression and/or mental illness.

On the Patrick Henry’s Scotchtown Facebook page from June 23, 2016 reads:


Shortly following the birth of her sixth child, Sarah Henry developed an antipathy, as they called it, towards her husband and her family. She withdrew from them, to the point where she was completely mute and would not feed herself. Her doctor eventually declared her a threat to herself and others. While determining options for his ill wife, there is substantial evidence to suggest that Mr. Henry did visit the Public Hospital in Williamsburg in 1773, but determined that he was not going to subject his wife to such accommodations. Instead, he arranged for her to be cared for at home at Scotchtown, in the basement for the remaining four years of her life. 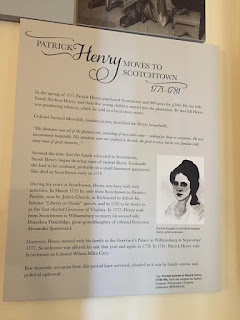 Linking to the post, “This Hospital in Virginia has a Dark and Evil History that will never be forgotten” the article reiterates what our tour guide, Sylvia, had stated but also includes pictures of the barred windows, isolation cells, strait jackets, and restrainment chairs.

Because there was so little information about mental health in the 1700s, there were few treatment options. Our guide, Sylvia discussed how it was common for those with mental illness to be bled, or restrained.  Mrs. Henry’s decline continued during the establishment of the Public Hospital for Persons of Insane and Disordered Minds, now Eastern State Hospital, which opened in 1773 in Williamsburg, VA. This hospital was more like a prison, and Patrick Henry did not wish to subject his wife to such treatment.  Gallenberger (2015) writes, “… [Patrick Henry] knew about the hospital and refused to send Sarah there. The Henrys were a family of some wealth, and this probably helped in the decision for Sarah to remain at their home, Scotchtown Plantation.”

Our tour guide, Sylvia, also explained what Gallenberger (2015) notes, “Henry's wife, Sarah Shelton Henry, dealt with depression and violent outbursts. Despite recommendations, together they refused to place her in a hospital, instead providing care for her at home until her death.” An apartment was created in the home’s basement. Mrs. Henry always had a nurse by her side and Sylvia emphasized several times that she was never left alone.

While standing in the dining room, Sylvia explained that Mrs. Henry’s accommodations were directly below us. She asked us to imagine how the family must have felt hearing Mrs. Henry screaming below; she also wondered how Mrs. Henry might have felt hearing her family dining above. I felt this was a nice posing of questions since it asks visitors to put themselves in both situations.

Sylvia then asked who was interested in seeing Sylvia’s quarters. She emphasized that there is a great deal of mold and cautioned anyone with any serious allergies. I figured I would hold my breathe as best as I could, like that was going to work.

Within the basement confines, the windows that had traditionally been wooden have been replaced with glass windows to keep the two rooms sunny. The basement entrance is from the outside of the building.  Sylvia explained that Mrs. Henry often complained about feeling chilly in the basement. Even on a somewhat hot and humid day, the area was quite cool. Included in the quarters was a mannequin wearing a strait dress.  She went on to explain that due to the size of the dress that they have only had one intern who was quite thin try it on. The intern stated that while wearing the straitdress it was quite calming. I raised an eyebrow at that comment.

Because of Mrs. Henry’s illness, which during the time society believed had to have been caused by demonic possession, she was denied a Christian burial. Sylvia explained that it is believed that she was buried somewhere on the grounds of Scotchtown.

There is so much sadness wrapped up in the entire story. Two young lovers against the world; one goes mad.


This isn’t like the fictional character, Bertha Antoinetta Mason in Charlotte Brontë's novel Jane Eyre (1847) who is locked in the attic and left alone. From several accounts, it appears that Henry and the family visited Mrs. Henry as much as they could, and as much as she could take the visitations.

My historic site selected for its un-weird focus turns out to be a a dark tourism site after all.

Email ThisBlogThis!Share to TwitterShare to FacebookShare to Pinterest
Labels: Dark Tourism, Goth Tourism, Homes and histories, Only in Greater RVA y'all