... a review of _Childgrave_ by Ken Greenhall

Childgrave (originally published in 1981 by Ken Greenhall and recently rereleased by Valancourt Books, a local publisher of some amazingly fine books) follows main character Jonathan, a photographer, widower, and father to Joanne, one of the creepiest little girls in fiction. Jonathan is pretty creepy himself. He becomes obsessed with a harpist named Sara. Although he describes her as beautiful, she remains somewhat plain in appearance while still having a profound power over the photographer who desperately wants to photograph her. He continually calls her beautiful but our narrator has a way of making somewhat grand statements that sound more like he is trying to convince himself more than trying to convince the reader. I go back and forth not trusting him and also thinking that he is a misogynistic pig. He’s probably both. Alas, the book was written in another time, to which I am grateful because the pace is perfection. It is slow but I write that not in a negative light. It reads like moving through an old haunted house: a great deal of anticipation with eerie scenes throughout.

To add to the eeriness, the daughter Joanne has an imaginary friend, whom readers will learn is not so imaginary and not so alive anymore. This really isn’t a spoiler if you read the description of the book. Even without discussing this friend, Joanne makes uncanny statements about hoping she has another birthday and wondering if her father will miss her when she dies.

When Jonathan cuts his finger and begins to bleed, Sara licks the blood. He laughs commenting about vampires and Sara’s response is a bit eerie. It would be too easy for her to actually be a vampire, right? Intending for readers to view her as mysterious, her character comes across more like an abandoned exoskeleton.  Is there any substance under that shell? She would be the first to note that she does not know what Jonathan sees in her. As a reader, I'm not sure either. And pseudo spoiler alert: when Sara finally stops being coy and Jonathan is allowed into her bedroom, their first sexual encounter is, err, sensually odd. Sorry, I cannot come up with a better description. That scene is going to stay with me like the sex scene in Katherine Dunn’s Geek Love that references a squashed cockroach. Alright, it may be just a wee bit less impactful that Dunn’s.


The book reads as if Greenhall had two great ideas for a novel but only had one book deal so he just wove them together.  Somehow it works. It resembles a Victorian ghost story and an M. Night Shyamalan film. To write any more would give it away.

I was engaged almost to the last page even though much of the time included being puzzled over the characters’ choices. Nevertheless, it was a great read and I recommend it if you have not picked it up.

Posted by Goth Gardener at 8:31 PM 2 comments: Links to this post

...quilling and crafting, ravens and bats... 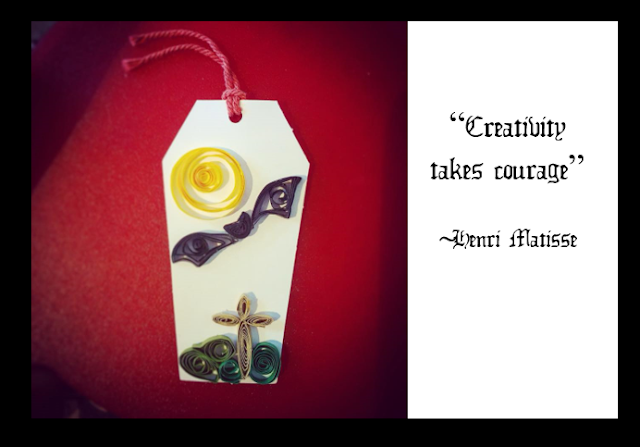 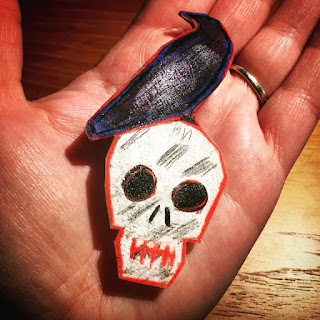 Decades ago when I briefly lived in New England, I got together with a friend and we did crafts. We called ourselves “craftists” because we were not strictly making art nor were we strictly making craft projects. We liked to think that we hovered somewhere between the two. 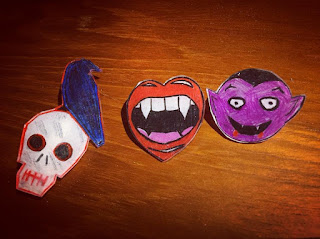 I remember reading somewhere that the difference between crafting and being an artist was being original. I cannot say that I really am that original. Most of what I do is because I have looked at something and thought, "That would be perfect IF...." and immediately I am deconstructing it to make it my own. Is that art? *shrug* Probably not. It just means that I know what I like.

Recently I have been making an assortment of crafts from Christmas spiders, which I previously blogged about, to my first attempt attempting quilling, and even making Shrinky Dinks. That’s right! Remember when you were a kid and you got to trace and color pictures, stick your entire project in the oven (with adult supervision, of course), and then watch as your work shrunk into tiny pieces of amazingness?!? 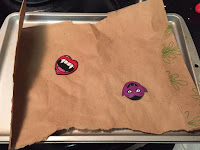 Well, over the holiday, I cleaned up my office, which is used as an office/ crafting space/ library/ reading nook and I found a pack of my Shrinky Dinks plastic pages from circa 1999. They were tucked away with a book on making paper flowers. Oh, yes, I feel that urge coming. Just you wait. 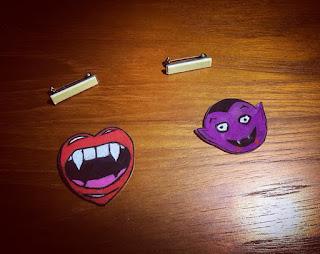 Anyhow, since the academic semester begins next week both for me as an instructor and also for me as a student in my final semester of the Public History program, I have a ton of items to check off on my to-do list. So, what am I doing this evening? Why, I am crafting!

First, here is my first attempt at quilling. I picked up a small introduction kit years ago and prompting shoved it in a drawer. Last year when my mother was cleaning up some of her stash of crafts, she handed over some of her own quilling supplies because while she thought she would try it, she never did.

I followed a basic bat pattern and then created the full moon and overgrown cemetery freestyle. The second one was all freehand without a pattern. I think if given excessive time, I might have a knack for quilling. 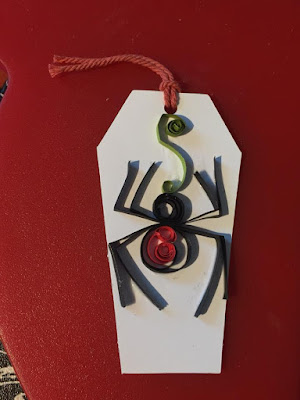 Shrinking Dinks can be much less creative. Since I do not have the natural ability to draw freehand, and the world just does not provide me with the visual images that I life, I tend to merge visuals with my own ideas. Case in point, I saw a heart shape mouth and decided it would look much better with fangs. The little vampire boy was freehand and he does look a bit wonky but that’s alright because I like wonky.

The entire Shrinky Dinks crafting project stemmed from Edgar Allan Poe’s 209th birthday party next week. I realized that I needed a brooch to wear to the Poe Museum birthday event. Because I’m planning to wear black velvet and the only raven brooch I have is, err, black, I decided that I needed to come up with another option. With so little time to order a custom brooch on Etsy, I decided that Shrinky Dinks was my answer.

Voila! Crafting magic in the house!