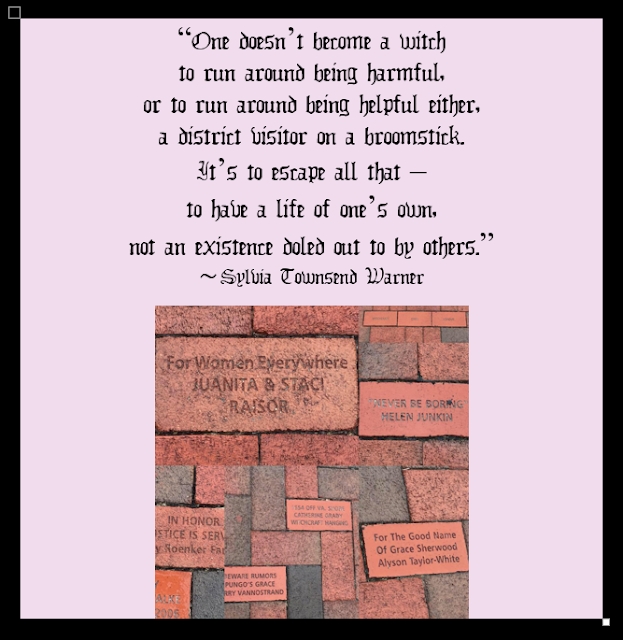 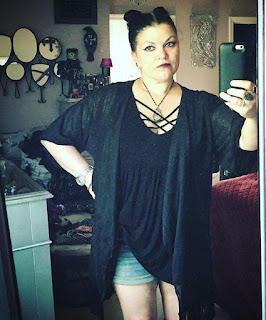 The USA Today post, “Witchy fashion is 2017's most exciting, subversive trend” has been going around social media. The article shares one of the fall trends with a focus on the “witch style” while noting that there are “many archetypes of the modern witch” which include "goth witches in black maxi dresses and capes”… yay! Capes are always good but they have been around in mainstream fashion for the last few years.


The article pointed to a few other descriptions with one being the “mall witches in anime buns….” Are anime buns the same as Princess Leia buns? If so, I’ve been rocking them for weeks because it has been over 100 degrees every day in Virginia and because, up until yesterday when my Gremlin Spike finally scared me, I have been parting down the middle to try to distract folks from noticing my grey roots. 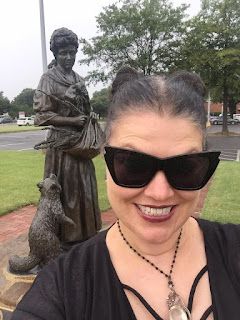 I don’t follow fashion trends so much but I do like being aware if this season I will be able to find lace and velvet in the mainstream shops. Recently, I bought a long, floor-length dress and a kimono-style garment, which isn’t something that I have ever wanted to wear before (mostly because they have little form and I’m a busty girl that needs some structure!).

And, as the article notes at the very end:

"…once you begin to awaken your inner witch, it also becomes clear that blindly following trends or copying what some celebrity is wearing is just another way of suppressing our own authentic self-expression."

*Witches* have been on my mind recently. Last week, my Babushka (my best friend/ more-like sister) and I had an excursion to Virginia Beach and then to Colonial Williamsburg to see the performance “Cry Witch.” We made a day of it by going to the Grace Sherwood statue and then attending the performance.

When you think witch trials in this country, you rarely think of the Commonwealth but it has its own history of witchcraft cases. 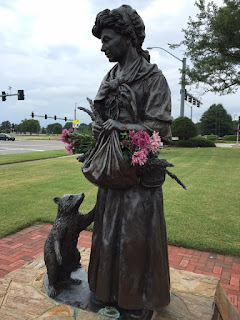 As I wrote in last year’s blog post about scapegoats:

Although most conquer up the Salem Witch trials when they consider colonial witchcraft, in 1626, Virginia was the first of the colonies to see a formal accusation of witchcraft of Joan Wright out of Surry County; and, in 1641, Virginia held the first trial with Mrs. George Barker out of Norfolk. 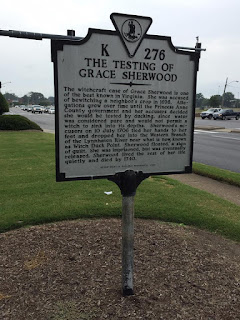 Two cases, to me, are particularly interesting. The first is with Katherine Grady who is considered the only person who was ever executed for witchcraft in Virginia. Even with convictions, Virginia officials were always hesitant about executing anyone convicted of witchcraft (perhaps one tiny aspect of Virginia history that isn’t so problematic). Ms. Grady’s case is particularly troubling because she had never even set foot on Virginia soil. Instead, she was traveling on a ship headed for the new colony from England when a fierce storm had the passengers seeking a scapegoat. For whatever reason, the elderly Grady became that woman and she was hung at sea. Because Virginia was the ship’s destination, the murder was under the Virginia colony’s jurisdiction and the captain had to report this when the ship arrived in Jamestown. 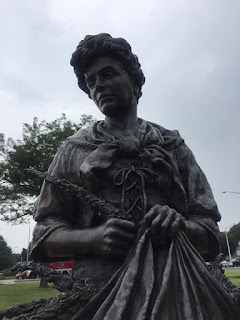 The second case came in 1698 when Grace Sherwood, who was considered a bit eccentric for the times, had rumors spread that she practiced witchcraft. Sherwood was a healer, an herbalist and a midwife who allegedly “wore men’s trousers when planting crops” (Strock). Later, she was accused of bewitching pigs and destroying crops. She was also accused of “riding” a neighbor before escaping through a keyhole. 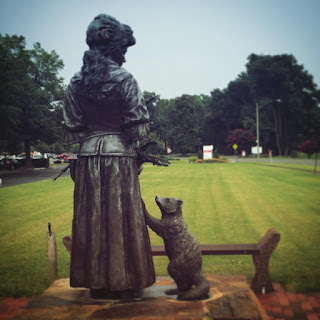 After several other allegations, Sherwood had formal charges against her in 1706. She was searched for the marks of the witch. Although none were found, she was ordered to a water ducking trial. Basically, if her body floated to the surface she was guilty; and, if her body sunk being accepted by nature, she was proven innocent. She survived and thus was proven guilty of witchcraft. She was imprisoned for 8 years and then released to live out the remainder of her life.

Just ten years ago, in 2006, former Governor Tim Kaine (who is now running for the office of Vice President for my international friends) exonerated Sherwood on the 300th anniversary of her trial.

Colonial Williamsburg’s “Cry Witch” performance goes through the case of Grace Sherwood. During the trial, the Colonial lawyers point out what was acceptable in court trials of that time, including dreams as damning evidence. In the end, the audience gets to make the ruling. It was a close-call while we were there but the group still found Sherwood guilty of witchcraft.

I don’t believe that focusing on witches is a new trend. Last winter, I attended the performance “The Peculiar Case of Jane Wentworth: A Witch Trial Based on Historical Texts” at Agecroft Hall; and, then later my fella and I attended the Colonial Williamsburg for the “Curse of the Sea Witch” event. There is resonance in our political climate. In my course on vampires, I repeatedly say, “It’s never about the monster.” This emphasis on witches, eccentric or simply working women who spoke up for themselves, isn’t actually about witches. Let’s be honest; this is about women.

Posted by Goth Gardener at 11:01 AM 3 comments: Links to this post

... an evening tour of Evergreen Cemetery... 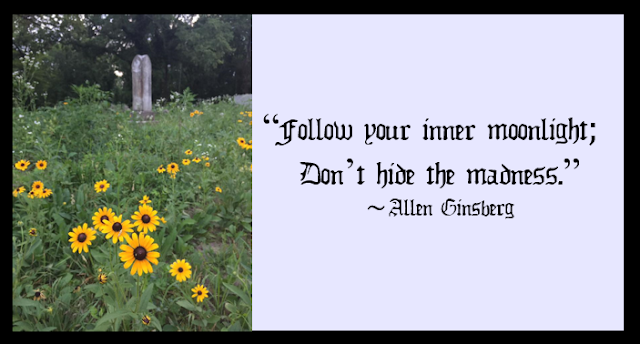 Since June, I have been taking a course, Marketing the Past, in the Public History graduate program.  In the course, our final projects included students writing business proposals for events, pursuing the steps in having a historical highway marker approved, and developing a connection between our historic cemeteries. Well, that last project was mine.

I developed a plan for a “remembrance trail” because we have some amazing cemeteries that visitors, and even our residents, are not visiting because they do not know about them. And, since we have wine trails, beer trails, and other historic trails, we should have a cemetery trail.

It’s been a fun and exhausting five weeks with a great deal of reading, writing, and researching.

All of my Public History courses have encouraged me to go out to see historic sites. Over the last week that’s been hard to do because of the heat and humidity. Yet, last week, the National Park Service hosted a tour of Evergreen Cemetery, one of the oldest privately-owned Black cemeteries in the East End of Richmond, VA. As soon as I read about the tour, I scheduled a MeetUp event for the Richmond City Cemetarians.

Around here, Evergreen is known both for the influential Richmonders who are buried there including Maggie Walker, and for the poor conditions of the cemetery. As far as I can tell, somewhere in the mid-twentieth century, people stopped tending to the cemetery as a whole. The cemetery became overgrown and it became difficult for families to tend to and visit their loved ones buried there. Hopefully the recent efforts to restore Evergreen to its original grandeur will take and we will one day see the place in the way that the designers intended it to look.

I have toured the place with the local volunteer coordinator after helping to clean up a cemetery next to this one but that was mostly pointing out the dilapidated conditions.  I wanted to learn more about its history while being in the cemetery. Clearly from the picture, I love a good book about cemeteries; however, there is just something about standing in the location while learning about it that touches me.


Although the NPS tour was scheduled for 7pm, it was going to be in the mid-90s… in a place where one would have to wear jeans and boots. I did and it was hot… but it did not feel as awful as I thought it would. The historic area of the cemetery provided a good amount of shade; and, well, I was really engaged with what our guides had to say. Still, because of the conditions, both the overgrowth and the heat, the tour was just an hour and only covered three locations including the plots of Price, Jones, and Walker. 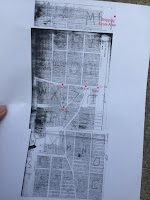 Just a brief overview of the tour since I am hoping this becomes a tour that is often more frequently.

Mr. Alfred Douglas Price Sr. was a renowned undertaker in the Black community. He started in the business in 1886, which was just before Evergreen opened in 1891. Because of the conditions of Evergreen, Mr. Price’s family had him moved to Riverview Cemetery in 1982.

The second stop was that of the Jones family plot. Drs. Sarah Jones and Miles Jones grew up during Reconstruction. The guides explained that these two were a power couple but with Sarah taking the lead. They married in 1888 and she attended Howard University where she would become the first black female in the state to practice medicine. She then put her husband through medical school.

The third and last stop on the tour was that of Maggie Walker and the Walker family and friends. Mrs. Walker was the first female bank president of any race to charter a bank in the United States.

While Dr. Sarah Jones lies with a humble marker, Mrs. Walker has one of the grandest in the cemetery.

Although volunteers have been slowly restoring the cemetery, so few of the 50 acres are easily accessible to visitors. At the end of the tour, there was time to meander through the cemetery and reflect on the place.

I hope the NPS continues to give tours here. It is such a beautiful place even on a hot summer evening and even in its present condition. 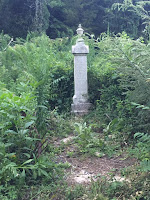 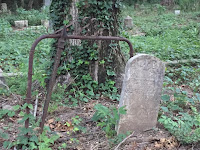 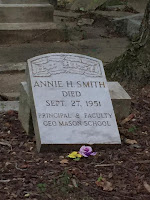 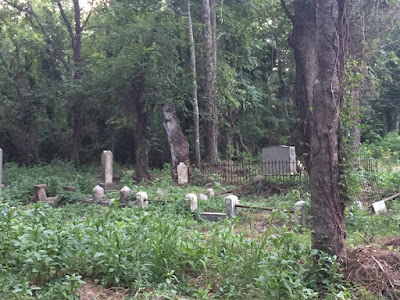 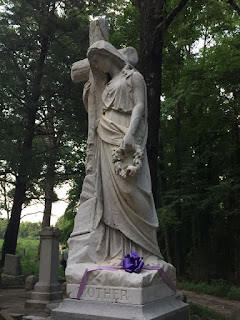 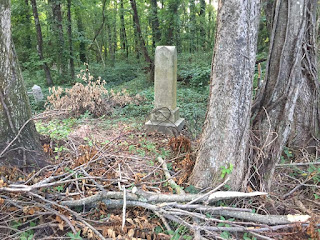 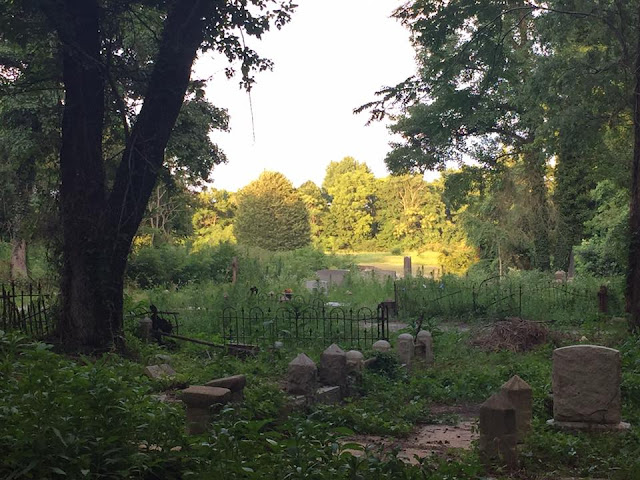 Posted by Goth Gardener at 2:14 PM 3 comments: Links to this post