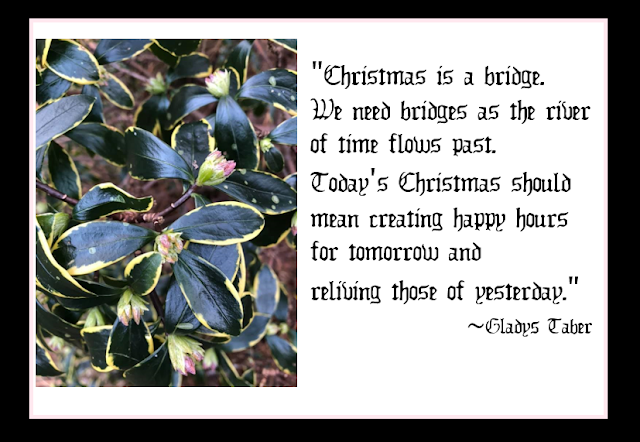 As Christmas in my household winds down, I have a touch of melancholy. The decorations will be put away; the handles will no longer light the windows. Everything feels like it is losing its magic. Or does it?

Candlemas approaches. This midpoint of winter, halfway between the December solstice and the March equinox, enables us to hope and welcome the return of spring and the sun. With the weather being so overcast, I am really looking forward to the sun.

If Candlemas be fair and bright,
Come, Winter, have another flight;
If Candlemas brings clouds and rain,
Go Winter, and come not again. 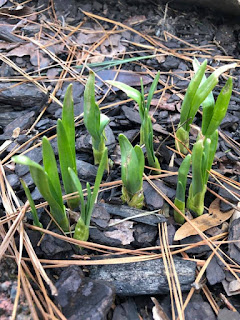 This week will have temperatures in the 60s during the day and low teens at night. Looking at the weather app, Candlemas, which is February 2nd, there is clouds and sunshine so there’s no telling what is in store… except if I look out into the garden. 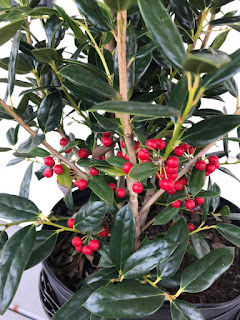 Since we moved into our house in summer, it has been exciting to see what was planted before us (except maybe for that ivy! But it was fun to discover the woods and the brick path under the ivy!) We have berries on some of the holly trees, and recently I have been watching these bulbs grow. I had hoped that they would be paperwhites but I think they’re a bit too large for that. 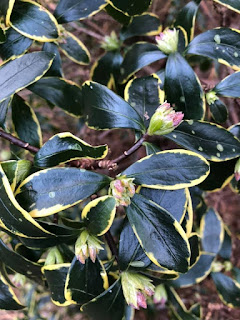 We also have this glorious bush in the backyard that we have suspected is a variety of Daphne odora. A few weeks ago, I noticed that she was growing buds and recently the buds have hints of pink. Because I have been researching the Daphne odora, I have learned that there are two types: the first has solid green leaves while the second has a green leaf with a pale yellow-near white border along the outside edge of each leaf. This variety is referred to as Aureo-marginata. That is what we have. Daphne odora also have two discrete flower colors with blooms that are white or pink, which open to reveal a cream color throat. I cannot wait until she blooms, especially since the fragrance is supposed to be the real showstopper. She will perfume the entire yard for about six weeks and I will want to be out in the garden.
It is still too early for me to tidy up the garden but we did have a tree company out yesterday to look over the broken branches from the ice storm. Only two branches need to be pruned. Overall, the pines and the Sweet Gum are healthy and happy. Those darn gum balls are everywhere so we’re learning about when our Sweet Gums prefer to drop them.
Posted by Goth Gardener at 11:12 AM 2 comments: Links to this post 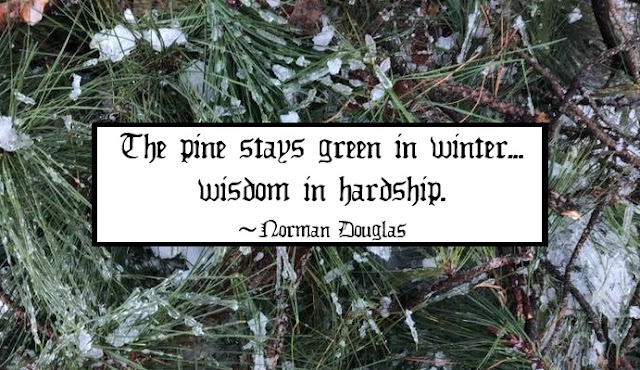 It started as a pretty fantastic morning. Today was supposed to be my first day back to work for the new semester and we were having a snow day! Yes, even professors get gleeful about canceled universities. Washington, D.C. has much more snow than we do in the Richmond, VA area, where we have mostly ice. I woke this morning early because even though my fella was teleworking, he needed to be up-and-at-em. 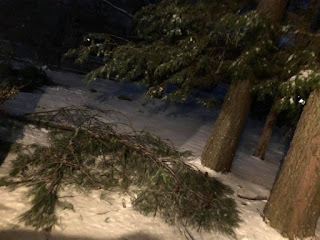 I peeped out the window to see if we had any more snow. What’s that big blob in the yard? Oh no, a fallen limb. It was much too dark to see how much damage there was but I quickly headed out on our front porch to survey the damage in the dark. I could see a large branch had snapped from one of our pines. As I headed over to the side of the house through the garage, I discovered another large branch. Later in the morning, I saw that a third large branch had fallen from another pine and crashed down on our picket fence and new baby crape myrtle. Oh no! Yet, aside from the snapped branches, there was no damage. Just.Like.Magic. 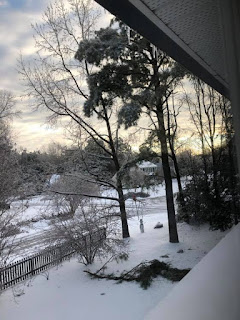 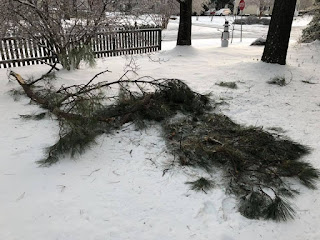 These branches were too heavy for me to move alone. Not only were they large but they were blocks of ice. My fella and I worked together to move them off to the side of the yard. Fortunately, we had a tree service out just last week to remove a few ominous too-close-to-the-roof branches. We will have to have them out again because now we have some dangling broken limbs. Friends and family have advised us to chop down the trees. Not happening, kids. Do you know how long I waited for my very own piece of land with trees! What I have not written about yet is the magical copse in our backyard. Well, in my …blood, sweat, tears, and black mulch… post, I shared that we have 0.35 acres of land, a third of which includes a copse of trees: tall pines, an oak, two sweet gum trees, crape myrtles and shrubs as large as trees including red tip photinia and Rose of Sharon. I added two baby crape myrtles including a red dynamite and an ebony and ivory. When we purchased the property, the backyard copse area was filled with ivy. I worked as long and as hard as I could; honestly, I’m still pulling up new vines and killing the stuff that is coming back even after we hired landscapers to clean out the poison ivy and English ivy that had overtaken the backyard copse. The ivy had wrapped itself so high up the trees that I feared they would smother. The vines on all of the trees were cut up to 6 ft and the vines above slowly died and are falling off the trunks still. 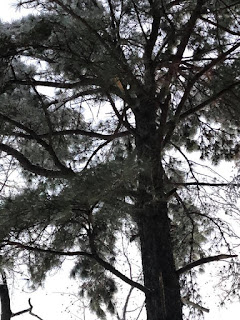 In August, only a month after moving to our new home, a storm blew in and while I was sitting on our back porch, I heard a loud crack and watched a tree come down... perfectly in our copse. It dodged every other tree and shrub landing inches from the Rose of Sharon by the road.  Talk about magic!

I love trees. For my 18th birthday, one of my friends gave me a tree because she knew it would be the best gift ever. It still lives on in the yard of my childhood home. When I walk through our copse or in our front and side yards, I touch the trees often. I talk to them always. “You okay? Did that mean ol’ ice hurt you?”… and, “aren’t you a beautiful tree.” They are living beings. Some of them will outlive me. I want to be kind to them just as they are so good to us.

We will trim branches to protect ourselves, the trees, and our neighbors; and, we will make sure that those branches that snapped are tended to. We will not remove trees unless we absolutely have to.

Also, that magical copse, well, we knew the copse on our property was magical. We had no idea that it was brick-path-magical though. My fella shoveled and raked to free part of the bricks only to discover old solar lights, a lattice, and more brick borders. We ended up with a trail right through the woods. Just like magic.

...the pet cemeteries of non-fiction... 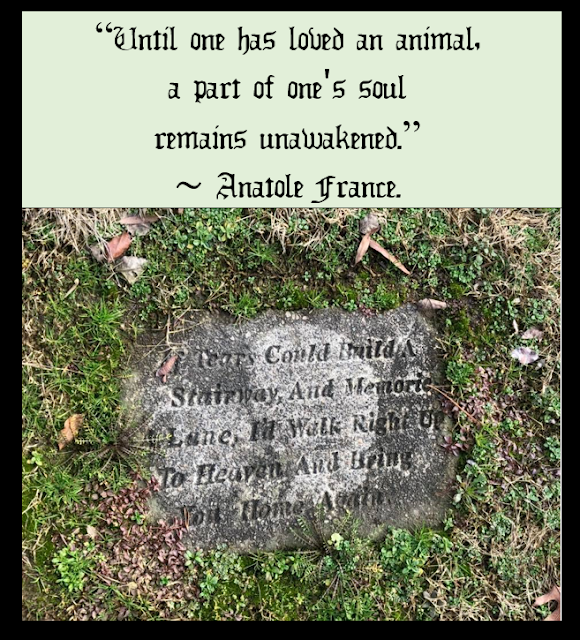 Other than the fictional ones you may cite, most people are not aware of any pet cemeteries. The most famous pet cemetery in the United States was established in 1896. Hartsdale Pet Cemetery, located south of Sleepy Hollow in New York, was quite unique in its time. By the 1920s, Hartsdale became *the* place where celebrities and the rich buried their furry loved ones.

I rarely visit memorial parks unless I am going to see family members or loved ones. This memorial park is a bit special. Depending on how long you have known me, for nearly a decade I was “Mom” to the best Doberman ever. His name was Aslan and he was much more of a lapdog/ angel than anything you see portrayed in movies. It has been nearly 13 years since he left this realm. And just like in life, he is still very near to me. I never considered a pet cemetery for him although there are over 600 operating pet cemeteries in the United States.  I suppose I just wanted to keep him close. 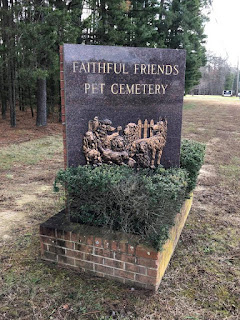 Memorial parks began in the 20th century; their emphasis is more of a focus on beauty and the memory of the living, with much less emphasis on death. You will not see any obelisks or elaborate grave markers. The markers are level with the ground, which makes maintenance at memorial parks much easier than other cemeteries with headstones. Most taphophiles and even cemetery-tourists do not visit memorial parks very often. Arguably, most Americans do not visit cemeteries very often but I’m trying to change that in my very small way.

On the Faithful Friends Pet Cemetery website, it reads, “Families can choose an everlasting tribute and place of final rest for their beloved companions—from dogs and cats to parrots and rabbits.”

The pet cemetery was established in 1949 at the same time Washington Memorial Park was started. Many memorial parks have fountains or focal points. Faithful Friends Pet Cemetery has a large ark with, what appears, as wooden animals. 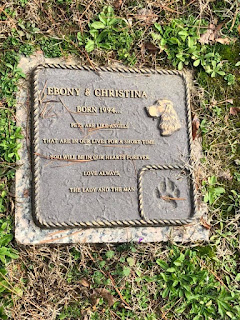 Brandes (2009) argues that there are three developments of pet gravestone inscriptions over the past 100 years including a growing use of human names for pets; the evolving definition of pets as kin to their owners; and, an enhanced religious and ethnic identity given to the pets.

As I walked around the graves, I completely forgot all about my interest in research. I was swept up in the sweet epitaphs with statements “loved by all” and “beloved family member.” My heart hurts for them; my heart still hurts for me.
National Pet Memorial Day is the second Sunday in September. 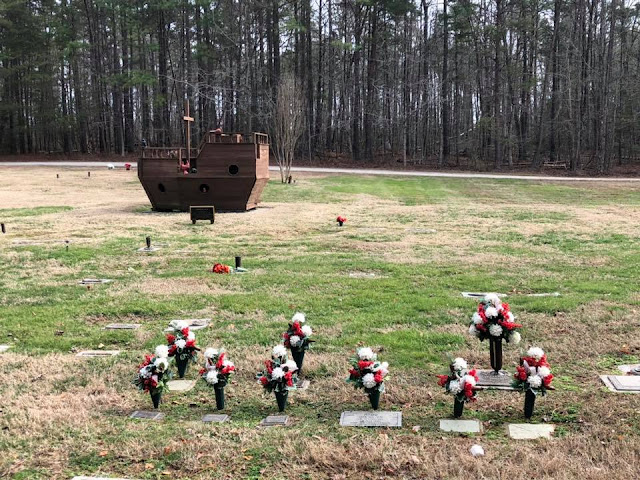 Posted by Goth Gardener at 3:34 PM No comments: Links to this post