Today was a day off. The proximity of the university to the Capitol makes for hectic commuting when we’re not in a pandemic so our semester schedule always gets pushed back every four years. I usually prep for my courses or work on research. Today, I could do neither.

What an exhausting few weeks. I hardly slept last night and this evening, I’m feeling emotionally drained. For someone who hasn’t actually interacted with people face-to-face much for 313 days, I could use some alone time. I pocked around at my houseplants. The prayer plant has a little green bloom. I didn’t even know they had blooms until it popped up last week. I have an amaryllis that is growing quite tall. The hyacinth continues to bloom. They smell quick lovely.

I came inside and realized that I needed a good cleanse so I lit a black obsidian healing candle, which has the lovely fragrance of white sage and lavender, and I took a hot shower. I held my rose crystal tight. And then I put on lavender oil. Now I’m wrapped up with classical music playing in my fella’s office (he did have to work today) and the crackling of the candle beside me.

Black obsidian helps cleanse the psychic muck and it also helps break negative attachments. The rose quartz inspires compassion and boosts a feeling of peace and calm.  The lavender is for the anxiety. I think I am going to make some tea. For dinner, we’re ordering out. I want a big salad and a slice of pizza from our local pizzeria. I just started Cherie Priest’s The Family Plot: A Novel a couple of nights ago. I think that seems like a good plan for tonight.

How do you help heal yourself? 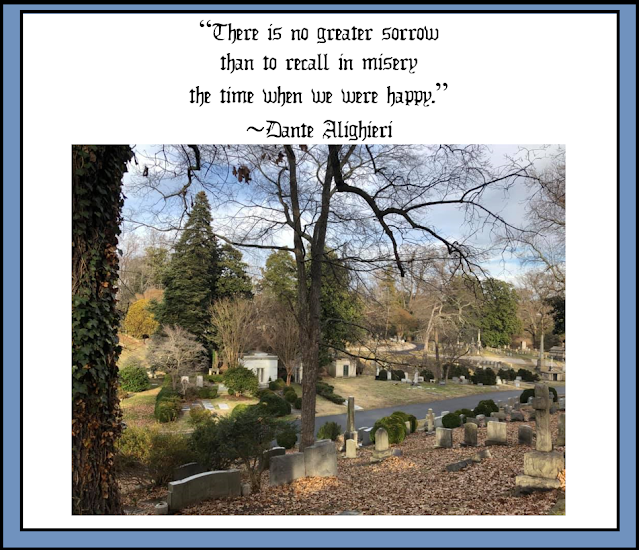 Last night I was working on some research and I casually read a poem by Margaret Junkin Preston because it's called "A Grave in Hollywood Cemetery, Richmond (J.R.T.)" and I laugh because I immediately believe I recognize the initials because JRT isn't common at all, right!

As a little back story, I often walked by his marker reading the epitaph and wondering, “Who are you John R. Thompson?” It’s an obelisk much like the others surrounding it in Richmond’s Hollywood Cemetery; yet, the inscription always made me stop and read it again. 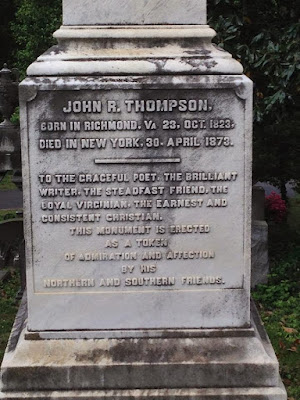 To the graceful poet, the brilliant

Writer, the steadfast friend, the

This monument is erected

Of admiration and affection

As an English professor, I love stumbling upon writers and poets who are no longer in the literary canon. John R. Thompson is one example. In 2017, I wrote a blog post on Thompson and his grave. Just a quick recap, John Reuben Thompson was born in Richmond and by 1847, he purchased the Southern Literary Messenger and became its editor. You might recognize that paper because of Edgar A. Poe who had been the editor a decade earlier. Also, happy birthday to Poe! Tomorrow he turns 212!

Unlike many Virginians of his time, Mr. Thompson did not take part in the Civil War citing health reasons. Ironically, many of his works are considered “war-poems.”

Margaret Preston, who is buried in Oak Grove Cemetery in Lexington, Virginia wrote for the Southern Literary Messenger during the editorship of John R. Thompson. I know this thanks to 1872 biography. 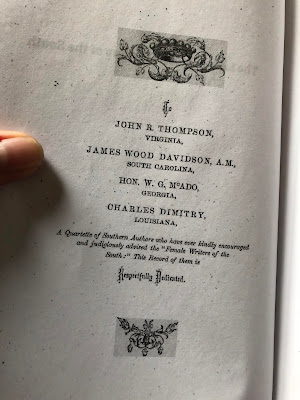 Just to be sure that JRT is who I think he is, I checked the preface to Poems of John R. Thompson and there's Preston’s name mentioned. A little more digging reveals they wrote letters to one another so unless there's another poet with the same initials from the same time period, I'm done with my bit of sleuthing.

But wait, just a few minutes ago I discovered that John R. Thompson endorsed that collection the 1872 biography was in. That would have been a year before he died.

I love imagining what Hollywood Cemetery looked like when Margaret Preston walked by Thompson's grave and then decided to write a poem about her experience. 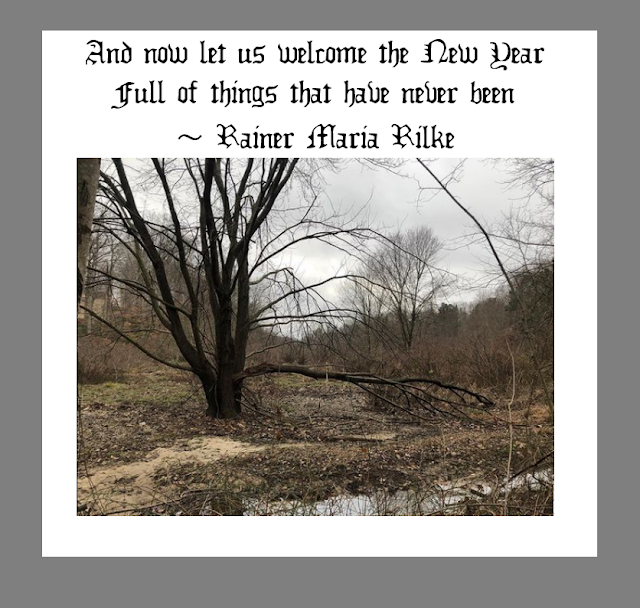 I picked up that old book again- the one that I return to from time to time. It has me thinking about the year. I have eight months before I have to physically leave my home to return to work. What do I want life to look like this year? What changes do I wish to make? How will I be the best version of myself?

I’m sitting on the front porch as I write this. I pause to watch a squirrel play. This morning, I watched another squirrel carry a branch much larger than him to his nest. The nest looks like it couldn’t possibly be stable. It’s in the branches of a small Ash tree. The nest is as big as a cauldron. I’m sure squirrels know the ways of trees much better than I do. I’m thrilled to watch them continue to dislodge the old ivy vines that once suffocated our poor trees when we moved in. This place has transformed; it has transformed me. The yard is finally looking like a garden after being here for just two years.

Reflecting on what went right this year—I stayed home, I spent an amazing amount of time with my fella, and I saved money, enough so that I will be renovating my bathroom sometime this year. I even bought a garden window for my bathroom. Also, I’m excited about my current research project—an idea that organically came to me in late summer and one that I had to pause for many reasons. I have been quite focused on it this last week and I am nearing the halfway point. Yesterday I read the introduction to my fella and he said it was the best writing I’ve done- so clear in focus and so passionate.

Other thoughts swirling through my head…

I think I need to reduce social media and probably return here. Those people are not my friends. They make me mad and raise my blood pressure, which I need to reduce anyway. I was born a worrier and stress radiates through my veins. I breathe in deeply and exhale. I return to worry. This isn’t healthy so I am working on finding a better way.

For 2020, I walked 378 miles, which wasn’t too shabby considering I had pneumonia that knocked me out, mostly because of the medicine. I had a 13-week cough that I kept trying to tell myself was allergies. No one really wanted to head to the doctor with a cough in 2020, although I knew I didn’t have Covid. We have been home, socially-distanced for (pauses to check calculator website) 295 days. I have gone to fewer than six places including the doctor’s office twice. We’re fortunate we have access to grocery delivery. My fella had been working from home for about a year so his life didn’t change much, and he is thrilled we don’t have to go grocery shopping. Sometimes you end up with a tiny zucchini or broccoli that is much larger than you expected. Small complaints for convenience and helping by giving space to others. Plus, I was a self-diagnosed germophobe before any of this. And, we’re introverts who really are not so fond of people. I worry about my extrovert friends; I realize this is very hard for them. For me, it feels like an amazing commuting sabbatical and a glorious mid-career change. I try not to smile too much as the numbers of dead increase daily.

I read a statistic right before Christmas that in the time it takes to listen to Bing Crosby’s “White Christmas” nearly five Americans die from the virus. The more contagious strain has hit the East Coast (Florida). Scary times, y’all. I hope you’re all safe and making safe choices.