Do you have that friend who always seemed perfect whom you thought if you could just be a wee bit cooler you would become her? That’s how I felt about my best friend from yesteryears. She seemed to have it all.

I was planning another post when I received the news that one of my dearest friends is losing her husband. This has been a complete surprise and I have no words. Without going into her private business, he had a massive heart attack and now her heart is breaking. Even when someone seems to have it all, it can be taken in mere moments.

I cannot recall exactly when we met…was it fourth grade? fifth grade? All through middle school she was the one I shared lockers with. In high school, she remained my very best friend. She, who had way more allowance and an only child, introduced me to all the music that I still love today. We were friends way before we were goth; we slowly went goth together even when our parents told us that we couldn’t.

My friend is in a place of mourning. Her heart hurts. My heart hurts for her. Tonight, go hug your loved ones a little tighter.
Posted by Goth Gardener at 5:49 PM 5 comments: Links to this post

Email ThisBlogThis!Share to TwitterShare to FacebookShare to Pinterest
Labels: Friendship

... the haunting first days of summer in Savannah... 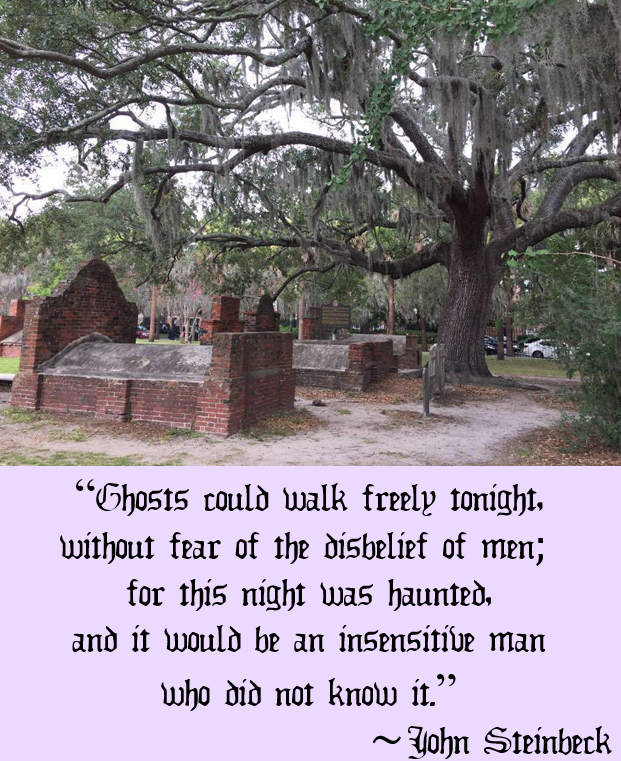 With summer vacation ahead of me, I determined that I needed a good gothy vacation. I wanted the ambiance of a haunted house (or two) and some strolls through some old cemeteries. Last year, there was a road trip to the Crescent Hotel; the year before, I had two trips to New Orleans. Three cemeteries in three days while staying in two haunted hotels in Savannah, Georgia was just what I needed. 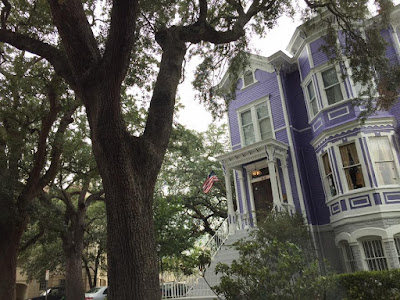 Savannah is about seven hours south of where I live so I determined that I could drive there in a day. After all, I used to live outside of Boston, Massachusetts which was nine hours. Of course, I was almost twenty years younger, but still, a drive to Savannah seemed reasonable. 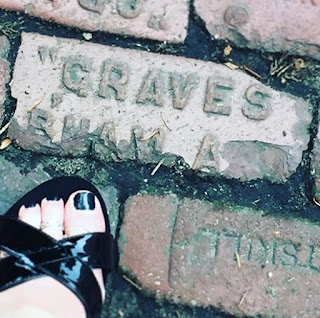 I headed out on Monday and arrived at the Amethyst Garden Inn, a Victorian Queen Anne Bed & Breakfast located in the Historic district right around check-in time. I pretty much picked it because it popped up on the Orbitz page; it once was a Victorian home; and, it was painted purple. The fact that it was haunted was something that I discovered later; and, it only added to the ambiance of the place.

Almost immediately, I dropped off my bags and headed to see Savannah. I was somewhat close to the cathedral, which I’ll write about later. I went there and, because I was so close, I went to Colonial Park Cemetery, which is right in the middle of the historic district. In fact, for many of my excursions, my GPS routed me through Colonial Park Cemetery. My gothy heart grew each time I strolled through that enchanted place. 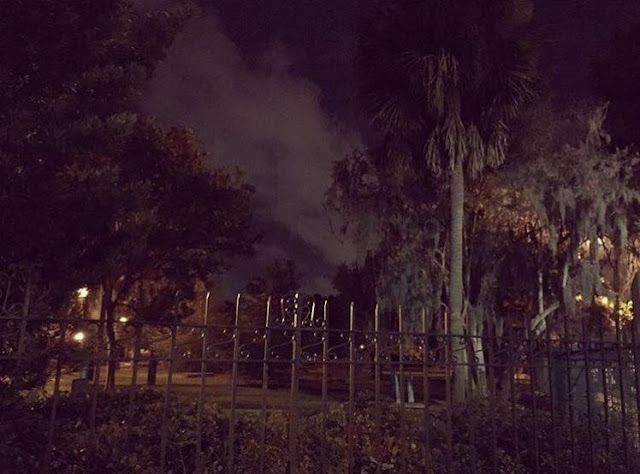 That night, at 10pm, because I had only been up since 4:30am and driven 7 hours so a late-night tour seemed so reasonable *yawn* at the time that I booked it, I headed to the The Beyond Good and Evil Tour. My tour guide, Zack, was awesome. He was both theatrical and informative as he shared details about Colonial Park Cemetery and various haunted spots in Savannah. The tour went on until beyond midnight.

Of course, most of y’all know that I’m there for the atmosphere so seeing a ghost is not necessary, which helps since I’m completely a skeptic. That night, I discovered that I was the only guest on the second floor of the inn.  But, with such a whirlwind of a start, I slept right on through and did not have a moment to consider being frightened. If one of the ghosts of the Rose Room, the room where I stayed, dropped in, they did not wake me. The next day, my plans were to wake early so that I could catch a Bonaventure Cemetery tour.

I will write about my adventures in Colonial Park Cemetery, Bonaventure Cemetery, and (my favorite) Laurel Grove Cemetery in the next few days. Overall, it was a great little excursion. I arrived home just in time to begin my first day of summer classes. I’m taking a course called Marketing the Past. Sounds cool, right? So far it is, and I spent most of yesterday working on my project for the class... a project that focuses on local cemeteries. More details on that soon.

Savannah is going to haunt me for a while; and, I do have a great deal to share.
With just a few days in, how are you spending your first days of summer?  Hope you're keeping it spooky!
Posted by Goth Gardener at 6:30 PM 2 comments: Links to this post 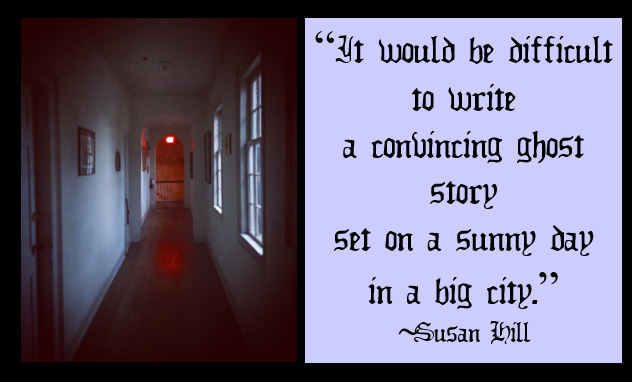 Last night I attended the Haunted Hanover Tavern tour that the Historic Hanover Tavern hosts once a month. While I’ve known about the tour for some time now, this is the first time that my schedule worked out so that I could attend.

Hanover Tavern is one of a few surviving colonial era taverns in the nation. While this tavern is not the original one on the property, there has been a tavern in the location since the 1730s. The earliest section of the present tavern was built in 1791. This is the area between the two chimneys, which you can see in the picture.
George Washington, Lord Cornwallis, and Patrick Henry all have connections to the Hanover Tavern. George Washington wrote in his diary about the lodging; and, Lord Cornwallis stayed at the tavern but per the tour guide, Tom, he did not pay his bill. Patrick Henry’s wife’s parents owned the Tavern from 1750-1764.  When P. Henry and his wife, Sarah, whom I have written about in a previous post, were married they lived at Hanover Tavern for several years. 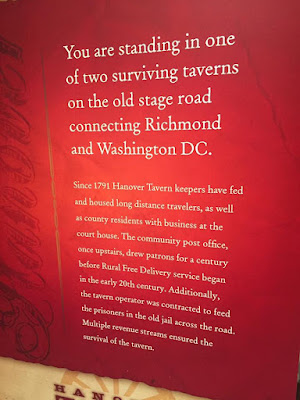 In 1763, Henry was called to the courthouse just across the street from Hanover Tavern to argue the Parson’s Cause case, which helped spark the American Revolution.

Speaking of the courthouse, my tour guide explained that beside the courthouse building stands the Old Stone Jail where public hangings used to be held both outside and inside of the building. I’m going to file this post under dark tourism as well. Not surprisingly, investigators have heard ghostly whistling in the stairwell of the jail.

Much later, in the 1950s, a group of actors bought the tavern and established the Barksdale Theatre, the nation’s first dinner theatre.

What was not mentioned in the tour but what I found on the Hanover Tavern website:

In defiance of Jim Crow laws, Barksdale was Virginia’s first performing arts organization to open its doors to integrated audiences. Later, in 1973, Barksdale produced Virginia’s first professional play based on the African American experience, Lorraine Hansberry’s To Be Young, Gifted and Black.[1]

My tour guide, Tom, explained that one of the most frequently spotted apparitions is the lady in black who is often seen wearing a Victorian mourning gown.***

Visitors have also heard footsteps when no one was supposed to be in the location, and they often smell perfume.

While taking the tour, one of the guests near me continued to say that she could smell cigar smoke. I, however, only smelled *old house* but y’all know I’m a bit of a skeptic.

Tom explained that they (and they meaning the members of the Transcend Paranormal team[2] who come out to do investigations) had a theory about this ghost. A woman named Margaret Wight, a diarist who lived at the tavern during the American Civil war, held a clue.[3] Her writing documented that a widow with the last name of Mitchell had two young children. It is believed that she could be the ghost who haunts the tavern today. Now, Hanover Tavern has published a book about the diaries so could this be an elaborate book marketing technique? Hmmm. You can find a copy of Wight's book on Amazon. Click the picture at the bottom of the post to be linked to the page.

Another ghostly encounter included one of the actors hearing a loud bang. When he entered the room, he discovered that no one was present but the table had been completely turned over and was sitting upside down.

And, finally, in the “Bride’s Room,” named because this is the location where brides get ready for the wedding, there is a male spirit who is reported to have a good memory. During one of the sessions, the spirit called each of the investigators by name.

I captured a rather ominous alien-like shadow on the wall but it was only another light fixture. Still spooky though!

Aside from the reports of gentle ghostly touches on the shoulder, eerie sounds, and even a ghost child peeping out the window, my favorite part of the tour was the ambiance.

Literally, it was a dark and stormy night. We  started the tour outside but only remained for a few minutes before the rain was much too heavy. Flashes of lightning and loud thunder only added to the ghostly tour delight. I really hoped that the power would go out (preferably while I was not descending  the historic staircase!)

Nevertheless, Haunted Hanover Tavern tours takes the spooky tour business quite seriously. Dimming the lights and having our guide in period attire added to an already creepy setting. For a small cost, visitors get to learn the history of the tavern while lavishing in a ghostly atmosphere.

[1] “The Hanover Tavern is a historic 18th century landmark in Hanover Virginia.” Hanover Tavern, hanovertavern.org/. Accessed 15 June 2017.
[2] Interestingly enough, the director of this group used to be one of my neighbors. He gave a great Halloween party!
[3] Haas, Shirley A, and Dale Paige Talley, editors. A Refugee at Hanover Tavern: The Civil War Diary of Margaret Wight . Charleston, SC, The History Press, 2013.
*** Please someone needs to catch the quote and ghostly reference. It cannot be for my own amusement.

Posted by Goth Gardener at 1:32 PM 2 comments: Links to this post