... watermelon Jack-o-lantern for Goth It Yourself August Theme Food & Beverage... 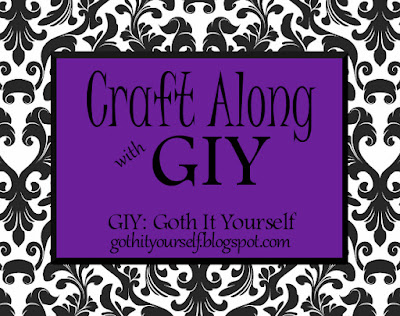 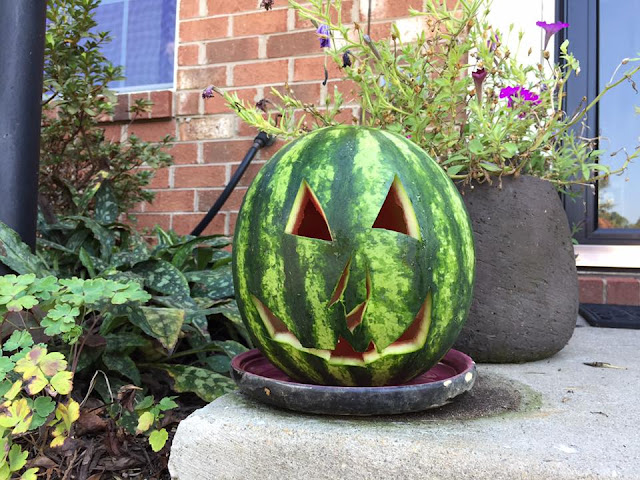 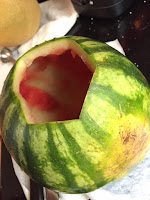 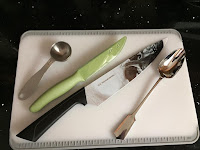 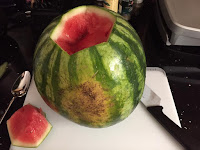 Lana Del Rey’s “Summertime Sadness” is on my On the Patio mix playlist and it’s playing in the background. I rarely listen to music on the patio because I’m frequently too distracted by nature; I’m also a girl who appreciates the silence but this afternoon I’m day-drinking, mourning the end of my summer vacation, and remembering watermelon juice. What was supposed to be a simply GIY (Goth It Yourself) post has had me go down a dark memory.

The post is supposed to be about the GIY August theme of Food and Beverage. If you’re not familiar with Bane’s blog, the idea is for bloggers to come together to focus on a craft project for the monthly theme. Around August 29, she posts her completed project and we post our own. 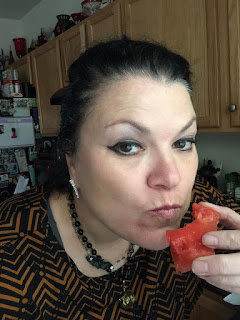 My focus was somewhat improvised since I realized earlier today that I have been a bit behind in reading blog posts. While catching up, I actually first saw Sarrah’s post on Giggles in the Darkness about her “meat head.” As a non-meat-eater, I really could not focus very long on her post without slightly dry-heaving over the pictures.  Sorry :-/ It’s me, not you! I went over to Bane’s original post and with university classes beginning soon decided that today would be the perfect time to get a post together. I had a small watermelon in the refrigerator that needed to be chopped. I buy personal watermelons whenever possible because my fella is disgusted by them in the same way that I would be disgusted by him devouring Sarrah’s meat head creation! Ha!  I’ve been slightly down as summer slips away from us. Don’t get me wrong because I love fall!!! But, I really do love summer. 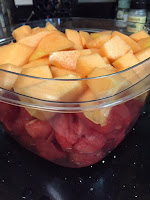 I decided that creating a Jack-o-lantern out of the watermelon could possibly lift my spirits. As I went through the step-by-step process, I tried to document what I was doing along the way.

Let’s be honest, when a girl’s forearms are juiced up with watermelon, she is going to take a bite here and there! 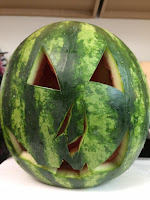 While I was scooping away at the melon with a tablespoon measuring utensil since for some reason I could not find the actual melon scooper in the utensil drawer pit and figured this was good-enough, I realized that I had an excess amount of watermelon juice. I started collecting it in a container, which then turned into an unwanted stroll down memory lane. 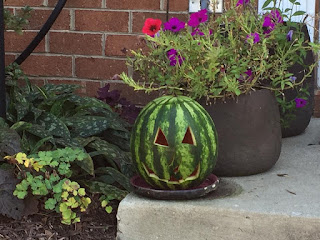 Flashback to 2000, I was teaching outside of Boston, Massachusetts and on the commuter train into the city received the phone call that no daughter wants to hear. Mom shared that Dad was in the hospital and that they were running tests. She assured me that everything was fine. By the next day, everything was not fine. I was told to come home basically because he was not going to survive after being diagnosed with pancreatitis. The next three months he was in intensive care. It was the first time I saw my father cry, aside from the time my childhood friend died. 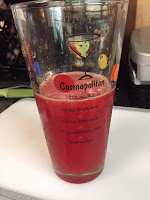 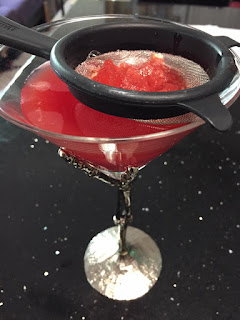 This time was different. He didn’t hide his physical pain. He wanted to die because everything felt awful and wrong. I left Massachusetts to come home so that I could help my mother with the household. She quit her job since she was close to retiring in order to go to the hospital daily. The doctor said he was going to die. I screamed at the doctor; I’m not really a screamer but the lack of bedside manners really got to me. Regardless, my father is still very much alive. He struggled in the ICU for three months and then another three months in the regular unit of the hospital. During most of that time, he could not eat or function normally. In late summer of that year, he was put on a liquid diet, anything clear. My father craved watermelon. The doctor agreed that if I brought juice he could have it. I remember going to one of the salad bars and attempting to drain the juice into a plastic salad container. One of the employees saw me and asked what I was doing. Instead, she went into the back of the grocery store to drain the juice from the recently sliced watermelon. When my father got the watermelon juice, it was the first time that I had seen him smile in over four months. So today, it’s hard not to reflect on that memory… even though he lived and slowly recovered. Having watermelon has always been a family memory that I share with my father. 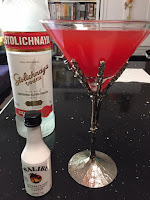 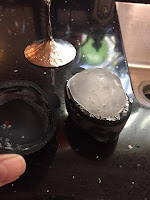 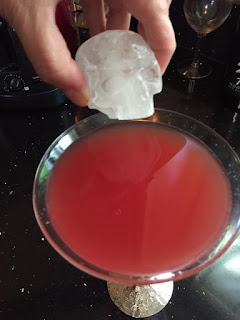 Today, with the leftover juice and wanting to focus on both the food and the BEVERAGE aspect of the theme, I mixed the watermelon juice into a vodka cocktail and added a skull ice cube. I’ll be honest, it’s not the best cocktail mixer but I am happy that I didn’t waste any of the watermelon. 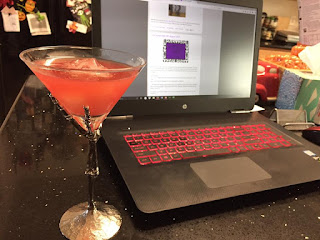 The Jack-o-lantern watermelon rind will sit outside for only a few days to be enjoyed my humans, birds, and insects. After that, it will go in the compost. It’s been so hot in Virginia the last month or so that my fella and I have been mindful of keeping the birdbath full of fresh water. We’ve also played fruits in the garden so that they birds, bees, and wasps (yep, they count too) can easily find moisture.

Posted by Goth Gardener at 5:51 PM 9 comments: Links to this post

Email ThisBlogThis!Share to TwitterShare to FacebookShare to Pinterest
Labels: DIY

I was tagged by The Curious Professor Z which means that I fill out this little questionnaire and tag three Gothy Darklings. I will tag Jade at Daughter of a Jaded Era, App’y at App’y Talk, and Connie at Hartwood Roses.
Getting to know me! Getting to know all about me ….

Thought Provokers:
Confessional (aka True or False):
So there you have it, some fun for today!

Posted by Goth Gardener at 6:49 PM 2 comments: Links to this post