“In the stars is written
the death of every man.” 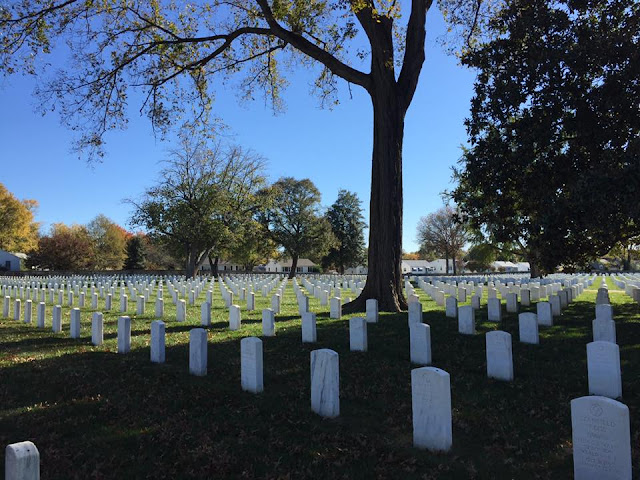 Just a few weekends ago, I organized a Meetup for the River City Cemetarians group to visit Richmond National Cemetery. Historian, retired teacher, and local author JoAnn Meaker has conducted extensive research of those buried in the cemetery and she agreed to share this with the group. This was exciting for me because it was the first event that was exclusive for our Meetup and we were also Ms. Meaker’s first audience/ test run.

Richmond National Cemetery is located in Henrico County, Va and is about three miles outside of Richmond city limits. During the American Civil War, the land associated with this cemetery was just within the Confederate’s fortification lines when they were attempting to defend Richmond. It isn’t a spoiler alert that the city burned but that’s another story.

The cemetery is 10 acres in size. Some of the land was purchased in 1867 with additional acreage being purchased in 1868 and then in 1906.
The initial burials were re-interments from other locations including one of my favorite places, Hollywood Cemetery.  Bodies also came from Belle Isle, or Belle Island Confederate Prison which was the location to around 30,000 prisoners of war, Cold Harbor battlefield, and Seven Pines. Many war historians recognize the names of these locations but for me they’re all places from home. I used to walk frequently at Cold Harbor (eek! They have the worst horseflies!); I previously posted about Seven Pines, and Belle Isle is a place where I hung-out in undergrad. It took me many, many moons to make peace with the land from where I’m raised but posts like this one have a way of being a bit haunting. It’s hard to process that THIS is WHERE it happened.

Meaker is originally from New York where she spent the majority of her life. After retirement, she and her husband moved to the area to be closer to her grandchildren. Her connection with the greater Richmond area goes a bit deeper though. While she is currently doing research about Richmond National Cemetery for a forthcoming book, she already has done some research in the area after finding a Civil War ID tag, which she explains is a precursor to the dog tags military personnel wear today, in her late father-in-law’s coin collection. The ID, which looks very much like a coin, reads “Union Against Rebellion 1861” on one side and “A.J. Beardsley” along with his division on the other.  This one token from Beardsley, a relative of her husband, started her entire journey of research for a fictional novel My Dear Emma, which includes a storyline that follows the real life experiences of Addison Beardsley who fought in the 10th New York Cavalry. All of her research eventually led to her forthcoming publication as well.

Meaker explains that before dog tags many of the soldiers would pin their names to their uniforms; seeing the number of “unknown” soldier listed on the gravestones is a reminder that so many of the dead were never identified. Richmond National Cemetery includes 9,322 soldiers of which 5,706 are unknown. 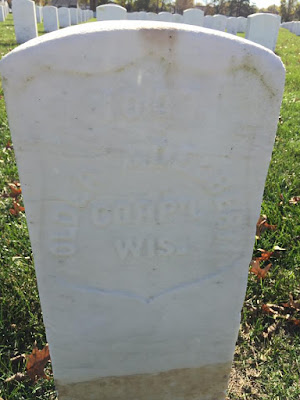 What I most enjoyed about Meaker’s tour of the cemetery was that she told stories of everyday men. The focus was not on their ranks or in which battles they fought. She shared stories of her husband’s family member, of two men who were struck by lightning, and even of writers. There are actually two known poets resting in the cemetery. This grave is that of Adelbert Older. While it is hard to read the inscription, it is alright because it is incorrect anyway. Older was a subscriber to the children's magazine called Robert Merry's Museum. Pat Pflieger argues, “Robert Merry’s Museum was a popular—though now forgotten—American children’s periodical. Founded in 1841, it offered entertainment and information to readers of all ages during the antebellum years, the Civil War, and Reconstruction, finally merging with the Youth’s Companion after the Boston Fire in 1872” (http://www.merrycoz.org/papers/LURE.xhtml).

Here is a description that I found on Pflieger’s website. Pflieger is an academic who writes, “My research is in a pretty obscure corner of 19th-century American culture, so this is where I organize the little bits of information as I gather it.” Considering my other blog is devoted to posting my own academic research, I tip my hat to the other scholars who construct similar havens.


"Adelbert, a tall Wisconsin farm boy with gray eyes and brown hair, was one of the poets among the subscribers to the Museum: 16 of his poems appeared in the magazine between 1857 and 1865. He enlisted immediately in the Union army when the Civil War broke out, but was discharged within the year due to illness; Adelbert re-elisted with his younger brother, Wallace (born c1842), in February 1864. Both were wounded in a skirmish at Turner’s Farm, in Virginia, on May 31 or June 1, 1864. Wallace died almost immediately; but Adelbert lay all night on the battlefield, and was taken to Richmond as a prisoner of war on June 2. Though on June 5 he wrote a cheerful note to his parents, making light of his injuries (they received the note July 27), Adelbert died three days later. The memorial page featured Belle’s poem in the left column and Adelbert’s poem in the right, with a stanza from “Mustered Out” at the bottom of the page. The patriotic image contains a “liberty cap” against a sword and a scroll, crowned with 13 stars probably emblematic of the 13 original states. The verse beginning “I’m mustered out!” is the last stanza of “Mustered Out,” a poem by the Rev. William E. Miller." http://www.merrycoz.org/museum/OLDER.xhtml

Meaker’s book is set to be published in 2017 on the sesquicentennial of the establishment of the Richmond National Cemetery. From her tour and some of the details which she shared about her book, it’s going to be very interesting. What is striking is how you can walk into a national cemetery and you pretty much see the same marker repeated again and again. Meaker has found a way both to unite the soldiers and to share their individual stories. 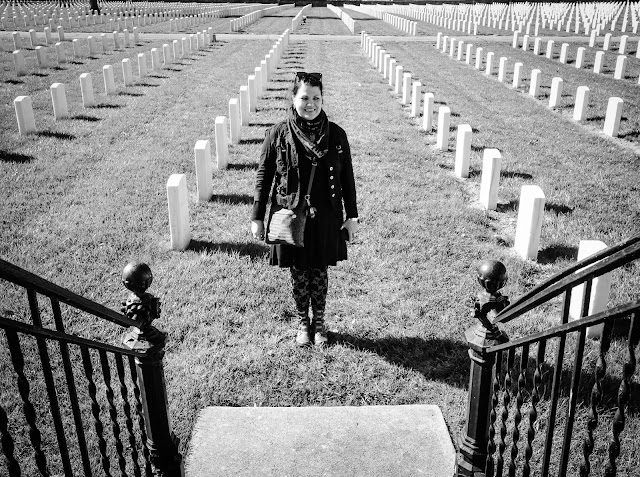 This picture is taken by the talented Chris Beasley, my cemetarian-brother-from-another-mother ;) If I look awkward, it’s because mid-conversation, Chris says, “Move a bit to your left.” He sees a picture in everything, while my fella says that I see a blog post in everything. 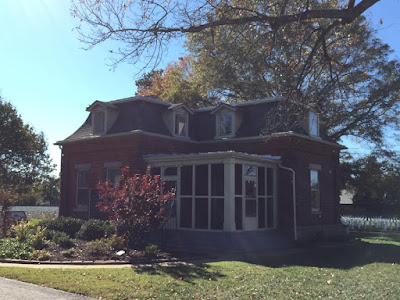 The familiar-looking lodge was constructed in 1870 from a design by Quartermaster General Montgomery C. Meigs. Similar lodges are located at Poplar Grove, Seven Pines, and Fredericksburg National Cemeteries.
Posted by Goth Gardener at 12:47 AM

Email ThisBlogThis!Share to TwitterShare to FacebookShare to Pinterest
Labels: books and bags, Cemetery Visit, Homes and histories, Only in Greater RVA y'all