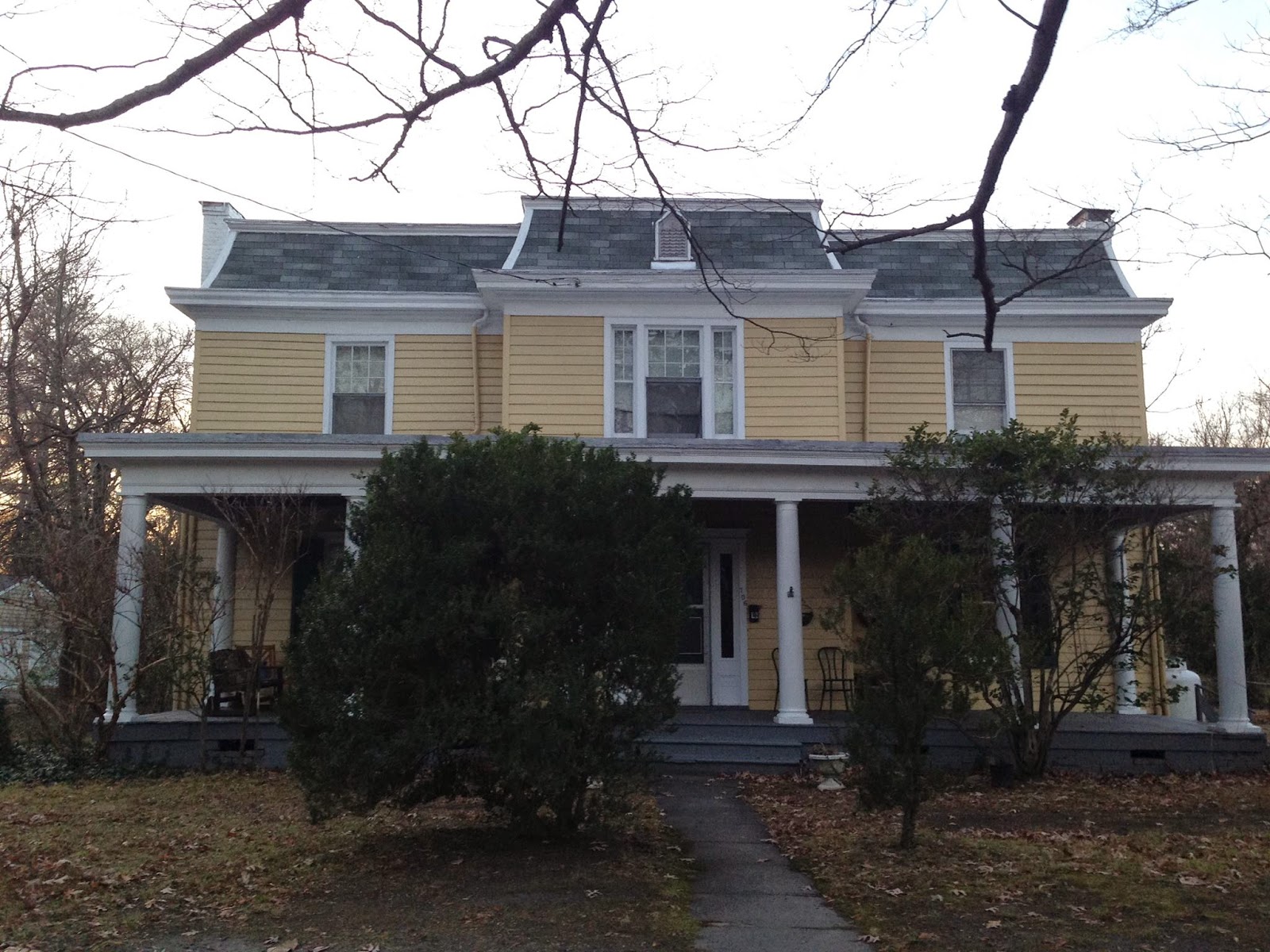 It’s December! I’m drinking S'mores hot coco with peppermint marshmallows. Seemed strange but turned out to be delicious! Of course, yesterday it was 73ºF (23ish ºC) and tomorrow it’s supposed to be warm again…just a little heat wave and then it will probably snow. That’s what it’s like here in Virginia.

Yesterday when I went out walking, I was gazing at the houses and thinking about how I always want to live here in this small town. Ashland isn’t very big but it is close enough to Richmond and the combined history keeps me connected. I like to imagine walking the same paths as those before me. While meandering, I am always drawn to the house. One of my favorite houses isn’t because of the architecture but because of its history.

Erected in 1858, one of the home’s former owners was Elmira Royster Shelton who just so happens to have been Edgar A. Poe's "Lost Lenore." In one of Poe’s last letters, he writes of Elmira and his longing to marry her. Elmira Shelton, who was Elmira Royster at the time, and Edgar A. Poe were engaged decades before when they were practically children. Ah, young love. (Dreamy sigh). Elmira was 15 years old and young Edgar was 16. They spoke of marriage but Elmira’s father tried to put a stop to it. When Poe headed off to UVa (my old stomping ground) the two were secretly engaged but Royster’s father seized and destroyed all of Poe's letters to his daughter before she even knew they existed. Assuming she had been forgotten, Royster married another man. (Wasn’t there a Nicholas Sparks movie about that? :p ) This was in the late 1820s.

TWENTY YEARS later… Poe returns. Again there is talk about marriage since by this time Poe’s wife has passed as has Shelton’s husband. She has children who disapprove but nothing can stop true love, right? Well, they never married. Poe headed to Baltimore and surrounding his mysterious death he mentions a wife he had in Richmond. Was he referring to Shelton?

Shelton never spoke of Poe again until 1875 when she was interviewed by Edward Valentine who was a Richmond sculptor and a family member of *my employers* aka The Valentine Museum. I’ll add this picture of one of his beautiful sculptures that Valentine created. It is in Hollywood Cemetery and is entitled “Grief”. Although it isn’t actually part of this story, I think it’s quite fitting. At the time she spoke with Valentine, she denied being engaged but then nearly a decade later she admitted that she was. When she died in 1888, her obituary in the Richmond Whig had the headline, “Poe’s First and Last Love.”


Yesterday when I walked by the house, there was an elderly woman sitting on a swing on her porch. She probably came out because I had taken a few pictures of her house. Ooops! But I prefer to think of her as someone who was sitting on the swing remembering being 15 and falling in love for the first time with the boy who had eyes like the sea after a storm (or whatever Buttercup said) and the softest Ministry t-shirt that he would give to her to sleep in (yeah, well that was me).

Last year I woke from a dream that was very much a memory of being a teen with my first love. I recall one of the first lines from one of his letters, "Run away with me and be my love". My first husband burned all of the letters that I had kept. I also remembering screaming that they were being burned into my soul. (An ex is an ex for a reason y'all). Back to the dream... I cried because I always remember how he saved me. My friend had just shot himself, all my friends were a mess, and he, who had just met me a few months before, drove two hours from Washington, D.C. (I had no idea that I would end up working there) for a visit... He hardly knew me but I guess young people don't care. I think we went to the mall. I don't recall much around that time but he was there and somehow it clicked that there was more to the world than all the death in my tiny hometown. We used to write these long handwritten letters but in contemporary times, I sent him an email to say thank you.  “I will always think of your 18-year-old self as the most magical part of my adolescence” and briefly recounted the dream. And I promise you that my heart skipped a beat (it still does) when he responded:

I did not save you sweetie, I just reminded you that you didn't need saving.

Elmira Shelton lived for nearly forty years after Poe died. One day I hope to live in that house and sit on the swing while remembering.

Posted by Goth Gardener at 9:30 PM

Email ThisBlogThis!Share to TwitterShare to FacebookShare to Pinterest
Labels: Center of the Universe, Homes and histories, Only in Greater RVA y'all, Poe