Last night I hosted a Cemetery Happy Hour with authors Loren Rhoads Denise Tapscott and Chris LaMay-West focused on the forthcoming book DEATH'S GARDEN REVISITED: RELATIONSHIPS WITH CEMETERIES. We had so much fun discussing cemeteries in Louisiana, Arkansas, California, and Maryland. I asked my guests to go a bit thematic with their drinks and connect them to their pieces in the anthology- each beverage represents a cemetery or grave.

Cheers!
Posted by Goth Gardener at 11:46 AM No comments:

...grave symbols and a secret society... 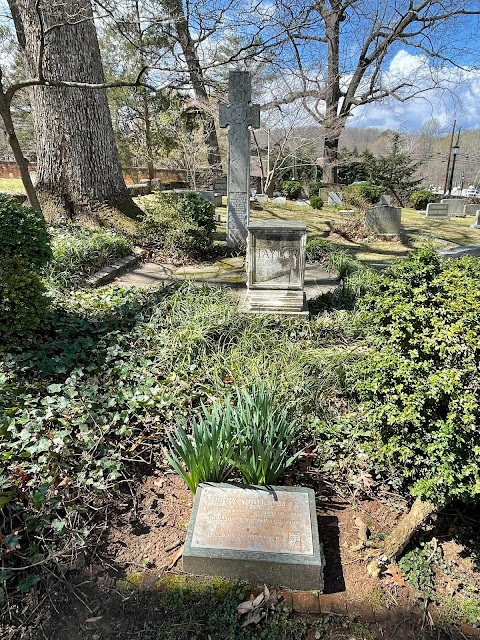 This is the grave of Henry Noble Taylor, known to his friends as Harry, who rests in the University of Virginia Cemetery in Charlottesville, Virginia. Taylor was a journalist and a war correspondent for the Scripps-Howard newspapers. He was killed on the job by machine-gun fire in the Congo on September 4, 1960. The inscription on his footstone reads: “He died to find and tell the truth.”

While many of us delight in discovering grave markers with symbols from society and fraternal orders, it was fun to see the mark of the Seven Society, one of the secret societies of the University of Virginia. The Seven Society was founded in 1905. Their symbol includes the number 7 surrounded by the signs for alpha (A), omega (Ω), and infinity (∞). 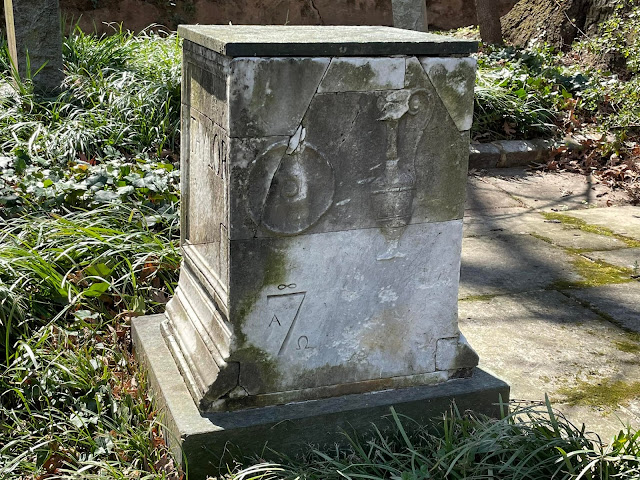 The inner workings of the Seven Society remain secret but their philanthropic gifts to the University include great flair. Gifts from the Seven Society have varied with donations including numerous sevens. In UVA Magazine, Robert Viccellio explains, “One notable example occurred during Final Exercises in 1947, when the commencement address was interrupted by a small explosion at the front of the stage, followed by a check for $177,777.77 floating to the ground. The money established an interest-free loan fund for any student, faculty or staff member who was in financial trouble.”

Membership is revealed only upon a member’s death when a banner appears during the funeral. There is also a tradition of wreaths in the shape of the number 7 with black magnolias. 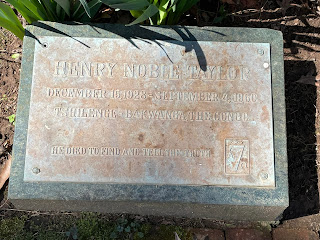 ...a student memorial in a university cemetery... 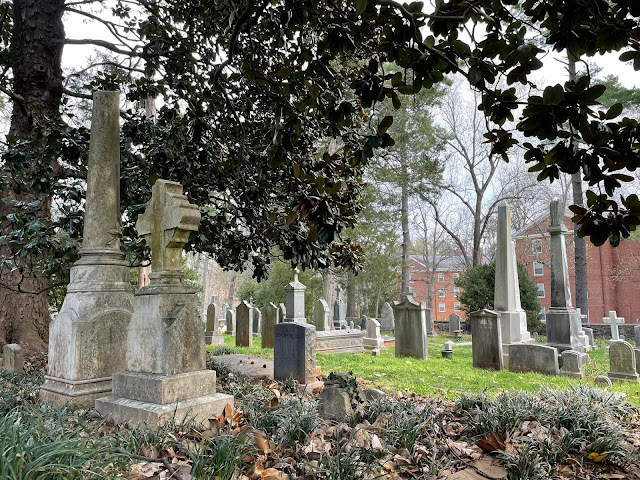 I have a new research project that I have started and was searching for a particular grave; yet I’m always distracted by cemetery memorials and epitaphs, which make me curious to learn about those who are interred in the cemeteries that I visit.
Saturday was a beautiful day to be in the cemetery. I headed to Charlottesville to the University of Virginia Cemetery that was founded in 1828 and used as the burial ground for many of the prominent individuals from the university.

Thomas Jefferson never made plans for a cemetery on the university grounds but disease, explicitly the typhoid epidemic in Charlottesville made the space necessarily.

In this particular cemetery, numerous epitaphs note how each individual was connected to the university from professors, librarians, doctors, students, and even the children of those who worked for UVa.

I’m intrigued by unusual deaths, deaths of students, and nearly anything circus-related so the grave of John A. Glover, who died on April 11, 1846 at the age of 21 years and 6 months piqued my interest when I saw that a Find A Grave bio noted that Glover was killed by the elephant keeper of a circus that came through Charlottesville. The source was listed as a letter from C.C. Wertenbaker, who was the son of UVa’s first librarian William Wertenbaker, to Prof J.A. Harrison (1897) in The Alumni Bulletin of the University of Virginia, Volumes 1-4. Professor Harrison had been inquiring about the history of the cemetery when Wertenbaker, who may have also enjoyed the unusual, shared details about the tragic incident.
After doing a little research, I learned that John A. Glover of Alabama had been a beloved student and his classmates offered a “tribute of respect” in that they believed the murder was “an atrocious murder” so they would wear black armbands, or the “badge of mourning for a period of thirty days.” (Richmond Enquirer, Tue May 26, 1846, page 4).
The murder occurred when there was a fight at the the exhibition of Raymond & Co’s Menagerie of Animals. Glover, considered “an unoffending bystander, in no way participating in the conflict, received a blow on the head with a stick or heavy bludgeon, which occasioned his death in a few hours.” (Richmond Enquirer, Tue April 21, 1846, page 4). The article continues by noting that the person who had been arrested was discharged. David Maurer of Virginia Magazine goes into more detail about the incident pointing that Glover was not necessarily free from blame as he “foolishly tossed a burning cigar into the arena” of a lion pulling a cart with an animal trainer. Glover’s actions spooked the lion and caused an uproar. Maurer writes, “In a moment of blind rage, the infuriated trainer picked a large tent peg off the ground and struck the student with it” and explains that according to Wertenbaker’s letter, the man was tried for murder but acquitted. An evening that was intended to be a fun outing for some students turned into a tragic event.

I'm very excited to announce that I have a piece in the anthology, Death’s Garden Revisited! This is a project by Loren Rhoads who brought us 199 Cemeteries to See Before You Die (2017).
Posted by Goth Gardener at 12:17 PM 2 comments: 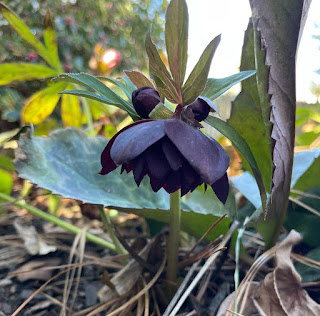 In folklore, hellebore is used to call forth demons and curse enemies but who has time for that these days. In the Victorian language of flowers, the secondary meaning for hellebores is hope. These flowers bloom in dark winter days and are the loveliest reminders that spring is on the way. There's a bit of pareidolia in this first picture. It's perfectly normal to make voices for one's plants, right?

Looking back on my blog, I realized that I haven’t really shown off these black beauties! Last year was the first time that one of the black hellebore plants bloomed. I think I bought six or so in 2019. This year, more have come in. I was told that it would take about 3-4 years for them to bloom so they're right on target and they are completely worth the wait!

Of course, like the smartest gardener ever, I put the tags in the soil believing that I will simply recall the names of each. Nope. No idea. I usually drop pictures of tags in Facebook because I do know myself pretty well and that is a way for me to try to help future me. But I haven't found those photos. Anyway, they're hellebores and they're pretty darn black to dark purple to maroon to a more blue-black. I already had the hellebore blooms that begin with pink and age into a gorgeous green.

In fact, I have little plants popping up out of the ground and I cannot for the life of me recall what I planted. I did move the Bela Lugosi daylilies around last year after finally splitting them. All the new black iris bulbs were unfortunately eaten by voles (even while being planted in the metal baskets) or attacked by bugs. I still have some Dracula’s Kiss irises that seem to have made it. 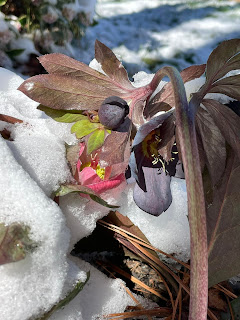 This morning I did notice just the tiniest sprouts of the Bleeding Hearts. The Valentine Bleeding Heart that I left in a pot is already a noticeable size. The one in the ground is thimble size. We had snow a few days ago and the hellebore blooms were completely not affected. In fact, I think the snow just watered them. Here's a look at a few. 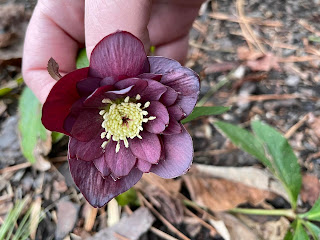 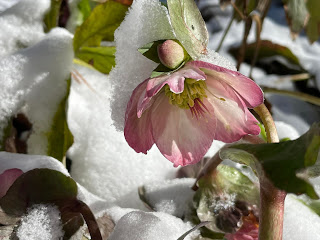 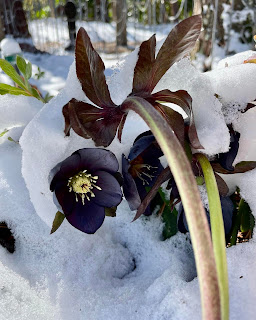 Yesterday, I went out to visit the grave of feminist, writer, and game designer, Lizzie Magie. Born Elizabeth J. Phillips on May 9, 1866 in Illinois to Mary Jane Ritchie Magie and James K. Magie, her father was a newspaper publisher and an abolitionist who traveled with Abraham Lincoln in the 1850s. 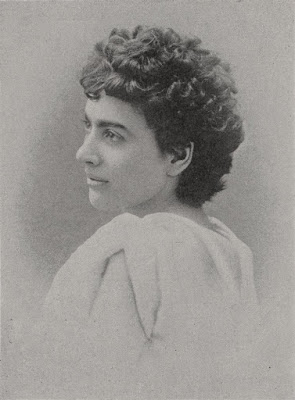 Photograph of author Lizzie Magie in My Betrothed, and Other Poems (1892), The Brodix Publishing Company, unknown photographer.

In the 1880s, she moved to Washington, D.C. where she worked as a stenographer and typist at the Dead Letter Office. Magie received a patent for her invention that allowed paper to go through the rollers more easily thus making the typewriter more user-friendly. This was during a time that it was quite rare for women to obtain patients. 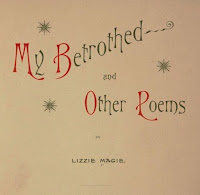 In 1892, she published a collection of poems, My betrothed, and other poems.

In 1895, her story, "For the Benefit of the Poor" was published in Frank Leslie's Popular Monthly. This ending of this story was rather unexpected and if you read it and know me, you'll know that I love endings like this.

And, in 1897, she had her short story, “The Theft of a Brain the Story of a Hypnotized Novelist and a Cruel Deed,” published in Godey's Magazine. I rather enjoyed this latter story about an aspiring novelist named Laura who just needed a little time to sit down and write her great American stories. She found the time when she was hypnotized but unfortunately, the professor who was the one who hypnotized her was not so trustworthy and shenanigans ensued. There were some aspects of the writing that were a bit dated but overall, I thought it was entertaining and I really liked the premise of the story and the characters for the most part.

What Magie is most known for was popularizing the circular board game. In 1903, Lizzie Magie invented The Landlord's Game, and applied for a patent on her board game. Decades later after her patent had expired, Parker Brothers published Monopoly. Charles Darrow was credited as inventing the game until economics professor, Ralph Anspach discovered Magie's patents. He wrote a great tell-all book The Billion Dollar Monopoly Swindle (2010) about this.

Magie passed away on March 2, 1948. She was buried beside her husband Albert Wallace in Columbia Gardens Cemetery in Arlington, Virginia.

Posted by Goth Gardener at 11:30 AM No comments: