... a haunted house in a cemetery, a seance, and a secret locket: A review of Sydney Mackenzie Knocks 'Em Dead...


“The best way to predict the
future is to create it.”
~Abraham Lincoln 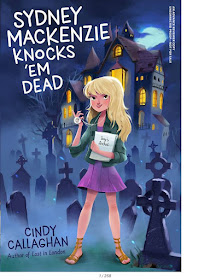 I’ll be honest; I picked the book because of the cover and then kept it because of the first line: “Even though I hated vampires and just about anything scary, I’d seen Fangs for You five times.”  But, before I get into the review, here’s the book description from the publisher:

West Coast girl Sydney Mackenzie moves to Delaware after her parents inherit a cemetery—and becomes involved in a mystery surrounding the Underground Railroad—in this M!X novel from the author of Lost in London, Lost in Paris, Lost in Rome, and Lost in Ireland.

Sydney Mackenzie is an aspiring actress and average less-than-popular California Girl. So when her parents drop the biggest bombshell ever—they have inherited a cemetery called Lay to Rest, which means a move to boring Delaware—Sydney is NOT happy. And to make matters worse? Their “new” house is actually right on the cemetery grounds—and it isn’t exactly California chic.

But after settling in, Sydney discovers that the creepy old house might have more history than she once thought. And someone—or something—is encouraging her to delve deeper into a decades-old mystery that dates back to the Underground Railroad. Will Sydney’s filmmaking skills and the help of some new friends be enough for her get to the bottom of the mystery of her new home?

At the start of the story, Sydney is desperately trying to fit in with the rich pseudo-mean girls of California who do little more than name drop brands they’re wearing. Sydney tries to fit in but she is not wearing designer clothing because her parents just can’t afford them. Her on-again/off-again best friend is Leigh who is the one, when she approves of Sydney’s hair/outfit/shoes, that goes out to eat fancy frozen yogurt with Sydney. Leigh is rich and can afford all the designer things that she deems important. Sydney thinks she wants this kind of life. Then when her phone breaks and she cannot afford a new one (because Sydney actually had to use her own babysitting money to buy it), AND learns that her parents inherited a cemetery and a Victorian house in Delaware, Leigh doesn’t show much interest in remaining Sydney’s long-distance friend. California-Sydney is completely unlikable in the beginning of the story… but then there’s Delaware-Sydney: a girl just trying to find friends so badly that she’ll do anything to just fit in. The cool thing is that these new friends like her for just being herself.

The Delaware friends are cool, especially Johanna who pretty much constructs a Ouija board- MacGyver style. She also studies a few books over the weekend to learn how to do a séance. And, it just so happens that Johanna is a natural.

There’s a somewhat-believable-not-hokey-at-all ghost. There’s the cemetery IN HER BACKYARD! There’s a scary tunnel that leads somewhere. They find a secret locket and a secret message. There are boy crushes and boy characters who are actually pretty good characters while simultaneously acting like young boys. And, there’s a pretty interesting somewhat-historic conclusion. How's that for holding back the spoilers!?!

I loved reading this book. It was high-interest kid-lit, and a great deal of fun. At 244 pages (for my Advanced Readers Copy), I was a bit disappointed that some of the storylines and characters didn’t have more, well, storyline and depth of characterization. For example, Elliott, the landscape designer for the cemetery who wears a clock and decorates the cemetery with holly berries. He was well-read and interesting so there was so much potential there. I wanted him to be more involved in the storyline. While I liked the conclusion, it was wrapped up too quickly and neatly.

But overall, this was a super cute story for your kids, your siblings, or your inner-child.
Goth Gardener at 8:10 PM
Share